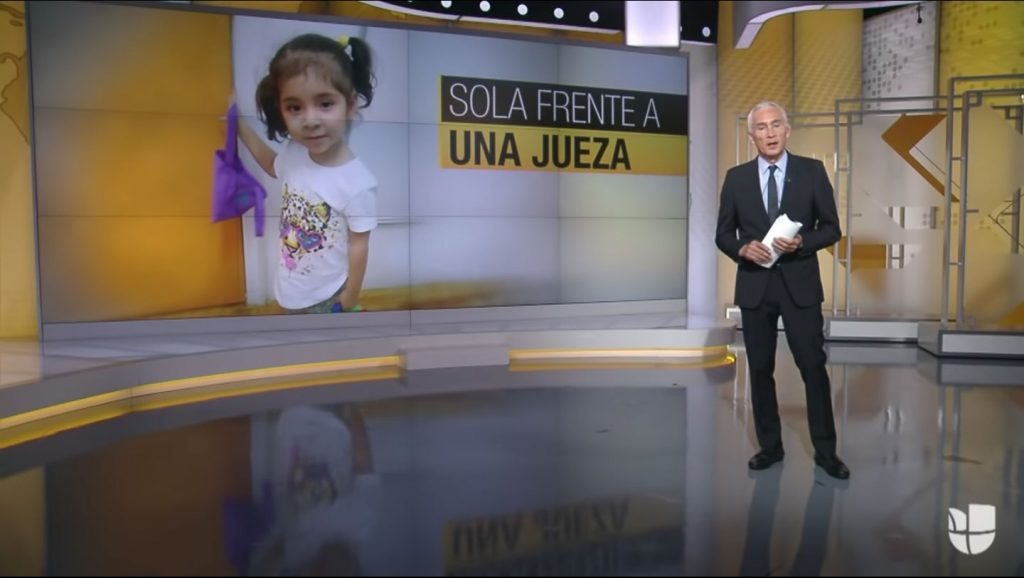 Fernanda Jacqueline Dávila is 2 years old, and she is locked up. The U.S. government would say that’s not true; that she is well taken care of and fed, that she has a bed, and her own clothes.

But the simple truth is that Fernanda is in custody in a detention center for immigrant children, and cannot leave.

Fernanda, a small girl with brown eyes and hair, is from Tegucigalpa, Honduras, but her maternal grandmother, Nubia, brought her to the United States. Fernanda’s mother, Alison Dávila, 21, was not happy with the idea of her daughter and mother making the dangerous trip north, but finally agreed. When Fernanda and her grandmother entered the country, they surrendered to Border Patrol agents.

“Five months earlier, my Mom asked me to let her take my daughter with her,” Alison told me recently, “and she said she would arrange for me to join them two months later. … I didn’t want her to take my daughter away, but she begged me. She wanted to make it through. She said my daughter would have a better future.”

All this happened in late July. Since then, Fernanda has been on her own. She wasn’t returned to her grandmother, who was released from custody and is living in Atlanta, nor was she sent back to Tegucigalpa to be with her mother (Fernanda’s father had died in an accident). She is sitting in a prison for children.

Fernanda and her mother speak every Wednesday and Friday on a video call, with the assistance of a social worker. “She cries a lot,” Alison told me. “She says she wants to be with her mama.” For a while, Alison imagined the worst: that the girl would be put up for adoption. “That was my greatest fear.”

A recent report by The New York Times (nyti.ms/2Nuf6dS) described in detail the day that Fernanda was taken to an immigration court hearing in New York. Her feet dangled from her chair, and she began to cry. The judge, who didn’t speak Spanish, asked questions through an interpreter, but Fernanda remained silent.

It’s understandable: What else is a terrified 2-year-old without her mother or grandmother supposed to do in front of an immigration judge?

There were almost 13,000 immigrant children in government custody in September, up drastically from 2,700 in May 2017, due to new regulations that make it more difficult to reunite these children with relatives or acquaintances. And many parents are afraid that they will be arrested and deported if they try to pick their children up.

Separating children from their parents is a deliberately cruel message from the Trump administration to Central Americans. It is intended to deter them from trying to come to the United States. But I have just returned from the Texas border, where I saw the surge in Central American families firsthand as they arrived and surrendered to immigration agents. Many told me they’d rather face whatever the consequences are of crossing into the country illegally than stay home condemned to a life of violence and poverty in Honduras, Guatemala or El Salvador. Now the latest immigrant caravan of thousands of Central Americans is in Mexico, expected to arrive at the U.S. border in a few weeks.

“This is so bad,” said Alison, referring to the Trump administration’s zero tolerance policy, which separated Fernanda from her grandmother. “No child deserves this. They are causing them psychological damage; these kids must be with their parents.”

An immigration judge eventually decided to deport Fernanda back to Honduras, and Alison told me she will be returned there within 120 days. This puts Alison slightly more at ease, since at least she knows her daughter will not be offered for adoption.

This is the country that President Donald Trump has created — a nation that snatches a 2-year-old girl away from her grandmother, then locks her up for months. And where is the sense of urgency? I can just imagine Trump’s rants and reactions if another country did the same to an American girl.

Fernanda didn’t do anything to deserve to be thrown in prison. She is, after all, only 2 years old.

(You can watch my TV interview with Fernanda’s mother here: