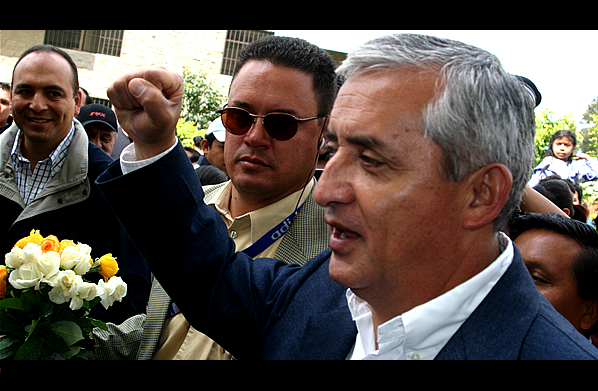 Guatemala’s Otto Perez Molina is the only sitting president in the Americas who supports the legalization of some illicit drugs — which also makes him a maverick among world leaders. Most presidents express similar opinions only after they have left office, once they are safe from political fallout. In recent years, after they’d stepped down, Brazil’s Fernando Henrique Cardoso, Mexico’s Vicente Fox and Colombia’s Cesar Gaviria all expressed support for legalizing marijuana. Perez Molina believes that in Latin America drug policies need to take a different path. Despite the billions of dollars that governments have spent fighting the cartels, “consumer markets have grown, instead of diminishing,” Perez Molina said in a speech to the U.N. General Assembly in late September. “(Drug) producing countries and types of drugs have multiplied, and commerce and traffic have tended to diversify. The drug problem is bigger and more complex each day.”

But, for the time being, Perez Molina stands alone on this issue. In his own speech to the assembly, Felipe Calderon, the president of Mexico, proposed that “new and effective ways” should be explored as an alternative to prohibitionist policies. The president of Colombia said something similar. But neither dared to suggest, like Perez Molina, that legalization policies put in place now could be effective in dealing with drug trafficking in the long run.

Combating the production and distribution of illicit substances claims, on average, 30 lives in Mexico and 12 in Guatemala every day. Statistics like these have led Perez Molina to conclude that Latin America’s anti-drug policies are failing, and that it is time to focus on long-term solutions to the problem. While he rejects the across-the-board legalization of all drugs, he questions the effectiveness of the current blanket prohibition.

Marijuana, however, is different. “It has been proven that marijuana is less harmful than alcohol and tobacco, through scientific studies,” Perez Molina said. “Marijuana is responsible for 30 percent of the drug market — if we can remove it (from the fight against drugs), we can concentrate on the rest.”

Perez Molina pointed out that legalizing marijuana in Guatemala alone, however, would do little to ease violence in the region. Cooperation with other nations is essential — Guatemala needs to coordinate with countries like Mexico, Colombia and the United States in order for any legalization effort to be effective. “We’re not going to take isolated measures,” he said. “We have to work together.”

Working together, however, is the tough part. The United States is a magnet for illicit drugs, and some estimates suggest that up to 60 percent of the illegal substances sold and consumed here pass through Central America. For his part, President Obama has said that he believes legalization is not a solution to the drug problem. Still, Perez Molina thinks there is room for negotiation.

In Central America we are affected by violence because drugs come from the south toward their destination, the United States, where the consumer is”

Perez Molina said. “When I first made this proposal in February, the reaction in less than 24 hours (from the U.S.) was `We reject this.’ ”

But two months later, at the Americas Summit in Colombia, Perez Molina said that American officials indicated that while they disagreed with the idea that a form of legalization could curb violence, slow trafficking or ease drug addition, they were willing to engage in dialogue about this issue. “That seems, to me, to be an important step,” Perez Molina said. He told me that while he realizes such a change in drug policy would be strongly opposed, he thinks that some form of legalization will be the norm in the future.

At the end of my interview, I asked Perez Molina what was the most difficult part of being president. His answer: Reaching an accord. “When a good idea is proposed there is always someone who opposes it,” he said.

In this, Perez Molina is absolutely right.

For now, let’s give him credit for having the courage to say what other leaders won’t.