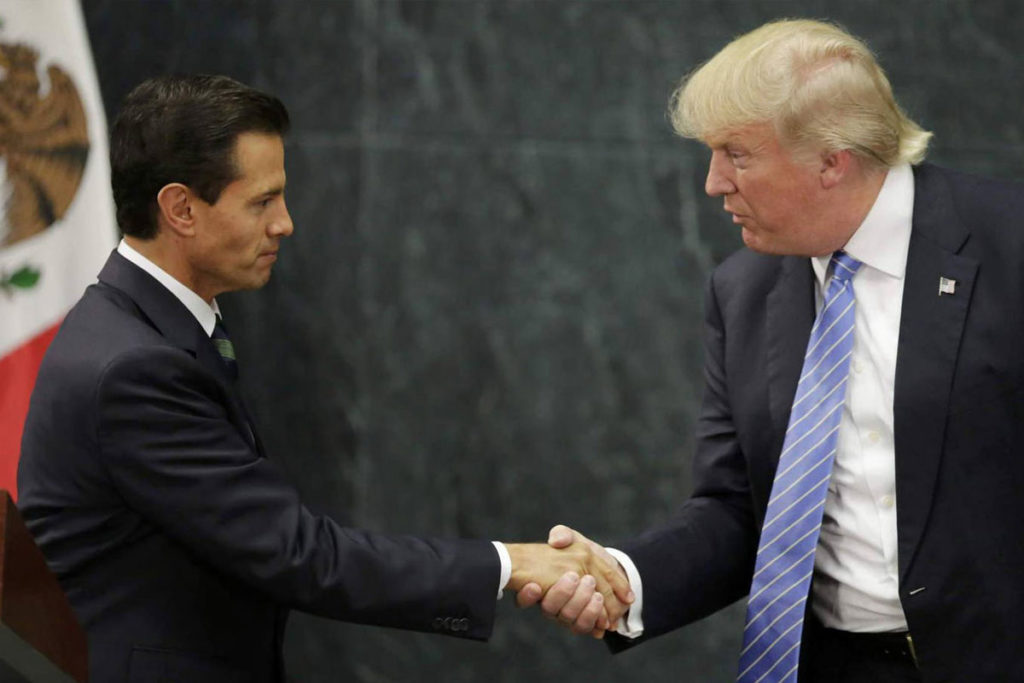 It was the great betrayal. Mexican President Enrique Peña Nieto betrayed millions of his countrymen when he didn’t demand that President Donald Trump apologize for likening Mexican immigrants to criminals and rapists when Trump launched his presidential campaign, nor did he dare tell Trump during a humiliating 2016 news conference in Mexico City that Mexico would not pay for a new border wall. It has been obvious since then that Peña Nieto, an incompetent and cowardly leader, will not defend Mexico when it comes to Trump.

Instead, the Mexican president has invited Trump to his home, coddled him and tried to befriend him. He also dispatched his minister of foreign affairs to try and negotiate with Jared Kushner, Trump’s son-in-law. In the end, it all went wrong, and that’s how the two countries ended up in their worst crisis in decades.

Peña Nieto never understood that facing up to Trump was a matter of dignity for Mexicans. Trump is a rude bully who only understands the stakes when he is forced to. The Mexican president’s submissive attitude has only given him more incentive to keep bullying Mexicans. Now, Trump has threatened to pull out of NAFTA.

Many of us despise Trump’s racist remarks, his enormous ignorance and despotic attitude. But we also take issue with Peña Nieto’s smallness, fearfulness and clumsy diplomacy. The next president of Mexico cannot betray the country again.

It’s important to do away with the prevailing stereotype of Mexico as weak when it comes to facing up to the world’s main superpower. It is not: Geography gives Mexico enormous bargaining power. Trump has claimed in the past that “Mexico does nothing for us.” But he is wrong.

Imagine what would happen if Mexico let every Central American heading to the United States travel through its territory unimpeded. Or think about the consequences if Mexico suddenly decided to end its war against drug trafficking and allowed the cartels to freely smuggle drugs from Central and South America directly to the southern U.S. border. (Let’s not forget that the United States is a huge drug market, with over 25 million consumers.)

Both of these scenarios would create a real crisis in the United States. The fact is that America needs Mexico in order to effectively deal with immigration and drug trafficking. But Peña Nieto has never gathered enough courage to remind Trump of this truth. Mexico’s next president cannot make the same mistake.

When it comes to facing up to Trump, Mexico must have a twofold strategy. First, it must be willing to take a stand, even risk a confrontation, with Trump. The country should not accept more insults or more threats. And if Trump wants to leave NAFTA, let him do it. Mexico is one of America’s main trading partners. Terminating NAFTA would have a negative impact on millions of Americans, since they would have to pay more for imports, and jobs would be lost due to a decline in exports.

The first stage of this new strategy should last until 2020, when we will know whether Trump will be re-elected or not. The second stage would be necessary from 2020 to 2024. If Trump were to be re-elected, Mexico would have to adjust its strategy toward him and attempt a rapprochement. But first it’s necessary to stand strong.

In addition, Mexican immigrants in the United States can be strong allies for the next Mexican president. However, the new president must be willing to listen to, and protect them. Peña Nieto has abandoned Mexican immigrants and has maintained a complicit silence with regard to Trump’s racist attacks. In fact, I haven’t seen a single Mexican government official on Fox News speaking out against Trump’s frequent attacks. This must change on July 1, when Mexico elects a new leader.

It’s important to understand that Trump will never be a good friend to Mexico. Period. Believing that he will suddenly change one of these days is nothing more than wishful thinking. The new Mexican administration must accept that the only thing that matters to Donald Trump is Donald Trump.

A strong Mexico that can stand up to Trump is not only a matter of dignity; it’s the only strategy that might work with this bully in the White House.

Share
FacebookTwitter
Previous ArticleWhat Kind of Country Do We Want to Be?Next ArticleWhere Are the Children?

Journalism in the Time of the Coronavirus

In Mexico, Women Break the Silence Against Femicide