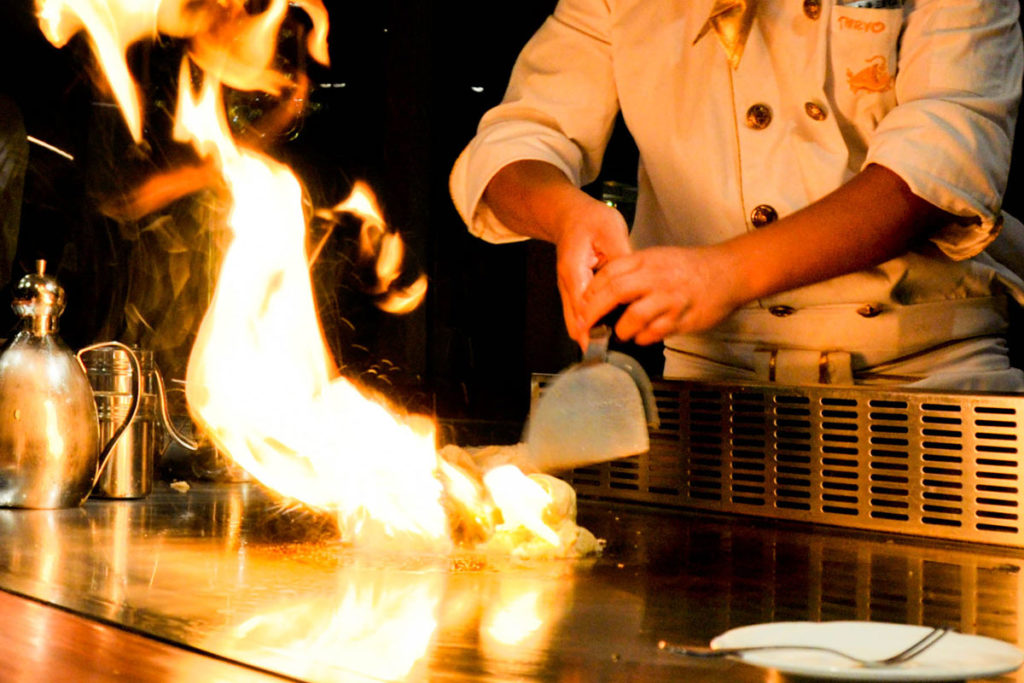 I saw them die right before my eyes: four prawns, twisting over a hot iron griddle.

One was jumping, trying to escape its imminent death. The noise these creatures made as they were being charred sounded like an almost indiscernible little cry of anguish. They were suffering. I could feel their deep black eyes looking at me, as though they were begging for help. A coward, I did nothing.

During a recent trip to Japan, a teppanyaki chef in the entertaining Roppongi area of Tokyo had asked us if we wanted to see how he cooked live prawns, and we naively agreed. We watched and became accomplices to something that felt like torture and murder. Then, worst of all, we ate the prawns, feeling disgust and guilt.

This unpleasant experience brought to mind Franz-Olivier Giesbert’s book, “L’animal Est Une Personne” — or “The Animal Is a Person.” Giesbert’s claim in the book is simple and provocative: There is no great difference between animals and humans. We all feel, think, communicate and breed. Furthermore, animals’ senses ? sight, smell, hearing, touch, taste ? tend to be far more acute than our own. “Our common ancestor was a digestive tract creeping in the ocean,” Giesbert writes in his book, “with a mouth to feed itself and an anus to defecate. That was it. This is how we managed to become what we are: human beings, birds, reptiles and insects. We are all the same, even if we don’t look alike.”

People who grew up with pets know how intelligent they are, and how they’re considered part of the family. My cat Lola lived with me for almost 20 years. Together we changed addresses endless times, and she was by my side as I wrote 12 books. She died recently, and I’m not overstating things when I say that her loss was as painful as losing an endearing human friend.

Similarly, my dog Sunset was a great friend. Growing up in Mexico, my father never let us have a dog; four boys and one girl were enough. But once I got established in the United States and started a family, we adopted Sunset, a wonderful beagle mix. I fondly remember taking Sunset running or bike riding with me, and I don’t think anyone ever greeted me more warmly. She died years ago, but my kids miss her as much as I do.

Sunset and Lola communicated marvelously well. Their intellectual and expressive abilities were sharper and more developed than those of many people. They weren’t inferior beings at all.

Giesbert’s book is full of anecdotes illustrating the notion that animals are more egalitarian and more caring than many humans, even superior to some. He recalls, for instance, a story about how a group of elephants in South Africa “decided to free [an accurate word to describe it] a herd of antelopes trapped inside a fence, and led them somewhere else.”

He also describes the horrors of industrial pig and cow slaughterhouses in Europe, and denounces the hypocrisy of those who might say they are against bullfighting yet accept the sacrifice that goes into a serving of tuna or chicken breast.

If we accept that animals are, indeed, people like us, how can we justify their death to feed ourselves?

There is no easy answer. Giesbert asserts that we are accustomed to killing in order to survive, and that becoming a vegetarian is half of a solution. “Living is killing,” he writes. “Vegetarianism is an impossible fight. Against yourself, against your family, against society. You have to struggle day after day, and most times you end up losing.” The writer himself acknowledges a weakness for grilled fish.

Like many humans, I make an arbitrary distinction between dogs, cats, elephants and dolphins, just to mention a few, and all the other animals. Just as I would never have considered Lola or Sunset to be food, I would never eat whale or orangutan meat. But the more I think about the prawns I saw dying in Japan, the harder it is for me to separate those animals that are for eating from those that are not.

Meanwhile, I’m getting more accustomed to the idea of questioning why animals and humans are considered so different. Animals are people.

I wonder what they think of us.

Share
FacebookTwitter
Previous ArticleIn Mexico, an Unstoppable WaveNext Article‘I Expected It to Be a Better Place’