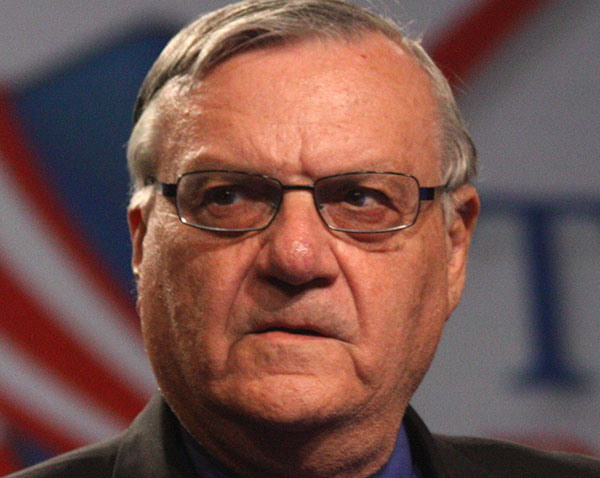 PHOENIX — As the title of his book proclaims, Joe Arpaio would like to be
known as “America’s Toughest Sheriff.” Among many immigrants in this country,
however, he is simply America’s most hated sheriff.

Since 1992, Arpaio has been elected to five consecutive terms as sheriff of
Maricopa County, which includes Phoenix’s metropolitan area. He is known for
dressing prisoners in pink underwear and housing them in tents without air
conditioning even when temperatures climb well above 100 degrees. And he is
notorious for his relentless efforts to detain undocumented immigrants.

One might think that the recent ruling in Arizona federal court, which
temporarily suspended parts of the state’s controversial new immigration law,
would stop Arpaio and his officers from detaining, questioning and arresting
undocumented immigrants. But Arpaio made it clear in a recent interview that he
has no intention of changing his ways.

“I haven’t changed anything,” he told me. “We are still doing our job.” In
fact, he said, just the night before, police had arrested dozens of people,
including three undocumented immigrants.

Latino and human rights organizations opposed to Arpaio’s methods have
accused him of arresting people simply because they look Hispanic and speak
English with an accent. But Arpaio denies it. “I am an equal opportunity law
enforcer,” he told me. “I lock everybody up, not just Latinos.”

“You don’t order your officers to stop people who look Latino?” I asked.

“We never do. That would be racial profiling. We do not do that,” he said.
“Actually, the Justice Department has been looking for a year and a half to see
if we racial-profile in another lawsuit. So, what’s the problem? We are still
here; we are doing the same thing.”

Alessandra Soler, the executive director of the American Civil Liberties
Union of Arizona, told me that Latinos in Arizona have a greater chance of being
detained by the police than whites do. Arpaio disagrees, calling out the ACLU:
“Of course they are wrong. You think I listen to them? They like to sue
everybody. I don’t care what they say.”

“Well, tell me, what does an undocumented immigrant look like?” I asked him.

He was a silent for a moment, then looked me in the eye and replied, “I
wouldn’t know. They look like normal people.”

“What are `normal people’?” I wondered.

Arpaio’s critics argue that he should use his time and resources to chase
real criminals — drug dealers, murderers, rapists, thieves — and not people
whose only interest is finding work. But in the sheriff’s mind, every
undocumented immigrant in the U.S. is already a criminal.

“The minute they cross the border, they have violated our laws. What do you
call that?” he said. “They are criminals. That’s what the law says.” Arpaio’s
own family immigrated to this country from Europe — “legally,” he hastens to
point out.

If Arpaio were in charge of national immigration policy, would he try to
deport the roughly 11 million undocumented immigrants in the U.S. today? “I
would do the same thing we are doing here (in Arizona). Enforce the law,” he
said. “If you come across any people here illegally, you take action. Very
simple.”

Toward the end of the interview, Arpaio expressed “compassion” for
immigrants. But he added that, first and foremost, he has a duty to enforce the
law.

“They call me Hitler and everything else, every day, in front of my
building,” he said. “Is that going to stop me from doing the job? No. I’m not a
racist.”