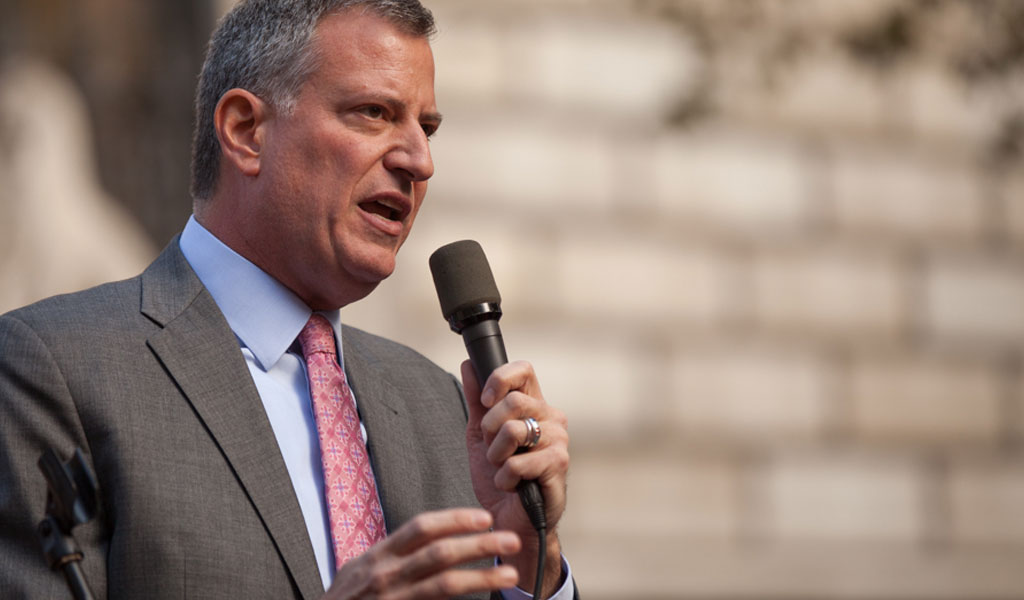 NEW YORK – If New York is the capital of the world – because people from all over the globe live here, and because what happens here can have repercussions everywhere – then the city’s mayor, Bill de Blasio, wields enormous influence in all that he does.

So it’s no small matter that he decided to make the invisible visible by offering a municipal ID to New York’s estimated half-million undocumented immigrants. If New York can do this, other cities can too.

New York took action because Washington wouldn’t. “If our federal government
isn’t going to act, we will act,” de Blasio told me in an interview at the Bronx
Zoo. Republicans in Congress have, unsurprisingly, blocked reform efforts aimed
at legalizing many of the roughly 11 million undocumented immigrants in the
United States. And President Barack Obama doesn’t dare act on his own.

The New York IDs will help undocumented immigrants meet basic needs like
renting an apartment and opening a bank account, and, one hopes, help curtail
harassment by the police. “Almost half a million of our fellow New Yorkers
happen to be undocumented,” de Blasio said. “They are our neighbors; they are
our friends; they are our co-workers. They need recognition, they need respect;
they need to be fully part of our society.”

Introducing the ID cards was an especially bold move, given that New York is
still viewed as a prime target for terrorists. De Blasio’s critics contend that
issuing IDs to undocumented immigrants will make it easier for terrorists to
blend in. The mayor disagrees, pointing to the continued efforts by the New York
Police Department.

“We have a thousand officers devoted to anti-terrorism efforts. NYPD
obviously understands terrorism,” he told me. “One of the best tools in fighting
terror is information, is intelligence gathering, is relationships on the ground
in every kind of community.”

But fear still lingers here, and not without reason. Last week, de Blasio had
to restore calm to the city after Iraqi Prime Minister Haider al-Abadi announced
that his country had received intelligence indicating that the Islamic State was
planning terrorist attacks on New York’s and Paris’ subways. “Terrorists want us
to live in fear,” the mayor said in a news conference. “We refuse to live in
fear.” The city’s subway trains kept rolling.

In the nine months since he took office, de Blasio has implemented an agenda
more liberal than those of his two predecessors, Michael Bloomberg and Rudolph
Giuliani. De Blasio dismantled a program that spied on members of the Muslim
community: It was “counterproductive,” he explained, and kept the police from
developing good relationships with the city’s Muslim population. He brought an
end to the police department’s controversial stop-and-frisk policy, which had
been applied disproportionately to African-Americans and other minorities. And
he implemented a public prekindergarten education program, known as Universal
Pre-K, which launched this fall and is projected to serve tens of thousands of
children each year.

Besides being very tall – nearly 6-foot-6 – the mayor is very fast. Walking
through the zoo, he noted that his political capital started dwindling as soon
as he took office. Perhaps that’s why he always seems to be in a hurry. He must
realize, too, that his toughest task still lies ahead. De Blasio campaigned on
the promise of addressing income inequality in New York, which has one of the
widest gaps between rich and poor in the United States. As with the ID cards for
undocumented immigrants, this challenge is an opportunity for New York to lead
by example.

Today, City Hall; tomorrow, the White House? I asked de Blasio whether he is
interested in running for president – not an uncommon ambition among New York’s
mayors. He gave me perhaps the most politically correct answer: “I just started
as mayor not long ago,” he said. “We have a lot to do right here.”

In other worse, the world’s mayor is just getting started.