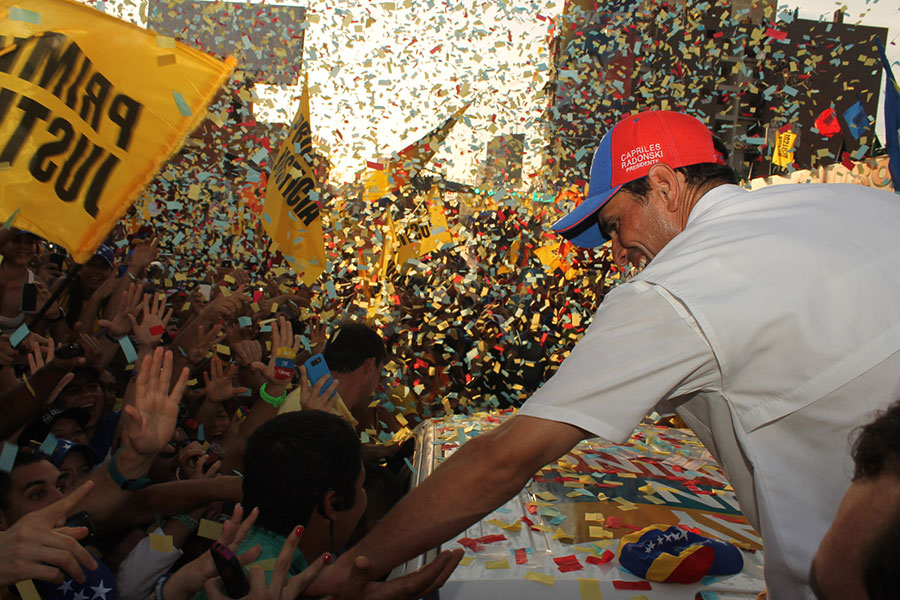 In the Venezuelan presidential election on Sunday, for the first time since Hugo Chavez took office in 1999, he will face an opposition united behind one candidate, Henrique Capriles.

Chavez knows that this election is the most important contest of his political career. Although he exerts control over most governmental organizations (including the agency tasked with tallying the vote), there is a real possibility that Capriles could defeat him. The question now is this: If Chavez does lose the election, will he relinquish power?

We can’t be certain that he will step down _ the president is unaccustomed to losing. Since coming to power 13 years ago, Chavez has faced little opposition, except on two occasions: In 2007 when a majority of Venezuelans voted against a constitutional referendum that would have increased Chavez’s executive powers and extended his term in office, and in 2010 when opposition candidates captured 52 percent of the votes in the national assembly. While most election polls put Chavez in the lead, several point to a narrow triumph by Capriles, which means that the result of next week’s vote could very well be Chavez’s third _ and definitive _ defeat.

Chavez is vulnerable because his popularity among voters has taken a hit. Many Venezuelans say they are worse off today than they were 13 years ago, and many feel that their country no longer functions as a true democracy, thanks to Chavez’s influence.

Also, the nation is one of the most dangerous countries in the world: A staggering 19,336 murders were reported last year, making 2011 the most violent year in Venezuela’s recorded history, according to the nongovernmental organization Venezuelan Violence Observatory. Yet Chavez has done nothing.

He has also done nothing about Venezuela’s endemic poverty, despite the country’s vast petroleum wealth. The nation’s high inflation rate has eroded workers’ incomes, while Chavez’s policies for stabilizing prices and the economy have been ineffectual. Additionally, Chavez has proven to be helpless at curbing corruption.

His use of executive authority has been equally disappointing. Chavez hoards power and threatens those who oppose him, undermining Venezuelan democratic institutions in the process, according to a recent report from Human Rights Watch (the report can be read here: bit.ly/NGDjaB). The organization points out that the decline of democratic organizations in the country_ from the courts to the media to activist groups _ is indicative of an ongoing deterioration of human rights protections. Indeed, when one man makes most legislative decisions on behalf of 29 million people, a nation can hardly be called a democracy.

What Chavez excels at, however, is making grand, empty promises. When I met with him for an interview in 1998, he told me that he would relinquish power in five years or less, that he would not nationalize any corporations in Venezuela and that he would respect the rights of the free press (that interview can be seen here: bi.ly/106E6f). Of course, he didn’t fulfill any of these pledges _ and then as president, he continued to make promises that he didn’t act on, and probably never intended to.

All of Chavez’s failures portend a defeat in this month’s election. He is well aware of it _ in recent speeches and interviews, he has sounded desperate and cornered. He has even resorted to fear-mongering, saying in a radio interview earlier this month that a victory for Capriles could mean “civil war” for Venezuela. This brings me back to my original point: Chavez is now threatening violence if he loses, so how likely is he to admit defeat on election day? Might he refuse to recognize the final tally if it goes against him?

Of course, we can only speculate about how he will react, but the experiences of Chile and Nicaragua, two nations in which voters ousted authoritarian governments in recent decades, provide examples of what could happen if Chavez loses.

In 1988, Chileans overwhelmingly voted to end Augusto Pinochet’s brutal 16-year rule. Pinochet’s defeat was so crushing, and the pressure for him to leave office was so great, that he had no choice but to step down. The same happened in Nicaragua two years later when the Sandinistas, having been in control for 11 years, suffered a shocking defeat at the hands of opposition candidate Violeta Barrios de Chamorro. Many people doubted that Pinochet or the Sandinistas would ever step down, but internal pressure, as well as pressure from foreign allies, forced them out. The same is likely to happen in Venezuela if voters side with Capriles.

If Venezuelans do choose Capriles over Chavez, it will be because voters now see through Chavez’s trickery and fear-mongering, and they want to change the country’s direction. But everyone knows that Chavez is not likely to relinquish power easily. Venezuelans will have to snatch it from him, vote by vote.