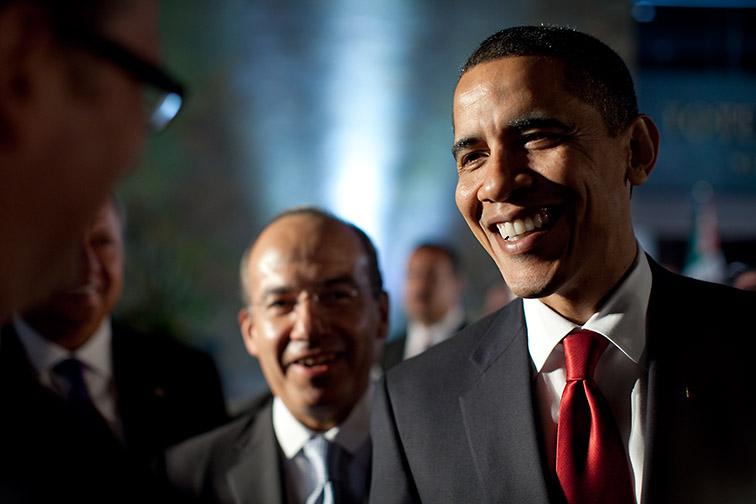 WASHINGTON, D.C. — I must confess that I’m a rather ungrateful guest. On May 19, I attended the state dinner that President Obama hosted for Mexican president Felipe Calderon at the White House. And I suppose, as a sign of gratitude, I should write only positive things about both leaders. But I can’t bring myself to do that.

I was born in Mexico City and my sons were born in Miami. I lived the first half of my life south of the border and the other half north of it. I have the privilege of holding passports from both countries and feel a strong allegiance to both of them. My mother in Mexico City watches the TV news program I host in the United States. My morning routine includes a look at the latest news about Mexico and the United States. I live in two countries, and I proudly belong to both.

As a result, strained relations between Mexico and the United States are not abstract to me. When the two nations hit a stumbling block, the resulting complications are part of my everyday life, as I move from one side of the border to the other. I am, in other words, a bridge.

So it pained me to see all the issues that were pushed aside and left unaddressed during Calderon’s visit and at that May 19 dinner, and at a time when two countries could resolve many of their central conflicts by simply mustering up a little more cooperation and creativity — perhaps at the expense of their stubborn pride.

Consider, for example, Mexico’s staggering crime rate. More than 22,000 people have died in drug-related crimes since Calderon became president in 2006, according to statistics released by his own government. And the independent Mexican Human Rights Commission estimates that seven people are abducted each day in Mexico.

Calderon’s visit to Washington last week was colored by the kidnapping of former presidential candidate Diego Fernandez de Cevallos. Calderon avoided the subject, but it was a grave crime — the consequences equal to what would have happened here if a former U.S. presidential candidate such as John McCain or John Kerry had been abducted.

Contrary to what Calderon has said, Mexico’s crime wave is no mere image problem. Today Mexico is a truly dangerous place, not unlike Colombia in the `90s. In both cases, the government lost control to drug cartels: The criminals act first, and the government can only react.

Drug trafficking is rampant in Mexico due to consumer demand in the United States. And the bilateral cooperation programs between the two nations have proven wholly ineffective. Drug dealing is a business, and so it must be fought not only with an army, but also with intelligence. Only improved intelligence can put an end to money laundering on both sides of the border and the arms trafficking from north to south. One thing is certain: Simply continuing to do more of the same is not a real solution.

There also remains the polemical issue of immigration. No one talks about creating an immigration accord between Mexico and the U.S. anymore, as they did during Vicente Fox’s presidency. The United States has effectively removed Mexico from the equation and is trying to solve the problem on its own. That’s completely absurd.

Most of the estimated 11 million to 12 million undocumented immigrants currently in the United States are Mexican, with more people arriving from Mexico every day. And as soon as the U.S. shows signs of economic recovery, there will be a redoubled wave of migration to the north — for which the United States is not at all prepared.

This, too, is a problem that can’t be solved simply through brute force. The new law against immigrants in Arizona, with all its racist overtones (Will the authorities in Phoenix or Tucson ask to see my ID just because my skin is brown and I speak English with an accent?) is not a real solution.

Mexican immigration to the United States is fundamentally an economic problem that requires an economic solution. As long as there are people in Mexico who are unemployed or earning $5 a day, and meanwhile there are jobs available in the U.S. that pay 10 or 20 times as much, more and more people will cross the border.

Only a realistic immigration accord between Mexico and the United States — one that allows a legal, constant and orderly flow of Mexicans into the U.S. — would address the root of the problem and provide a long-term solution. But at the White House last week, Obama and Calderon didn’t even discuss the possibility of such an accord.

I don’t mean to sound ungrateful — the evening wasn’t a complete disappointment. The food prepared by Rick Bayless, of the Chicago restaurants Frontera Grill and Topolobampo, was exquisite. Beyonce’s performance was both intimate and spectacular. President Obama greeted me cordially, despite all the times I’ve reminded him about his unfulfilled promise to introduce a proposal for immigration reform during his first year in office. And Calderon shook my hand with a smile and told me that he would finally grant me an interview. (We’ll see if he follows through.)

But the truth must be told. Calderon arrived and left, and everything remains the same. Innocent people continue to die in Mexico; de Cevallos has not yet been found; and in Arizona, Mexicans and Latinos run a greater risk than ever of being detained by the police.

The dinner was wonderful. But it wasn’t nearly enough.