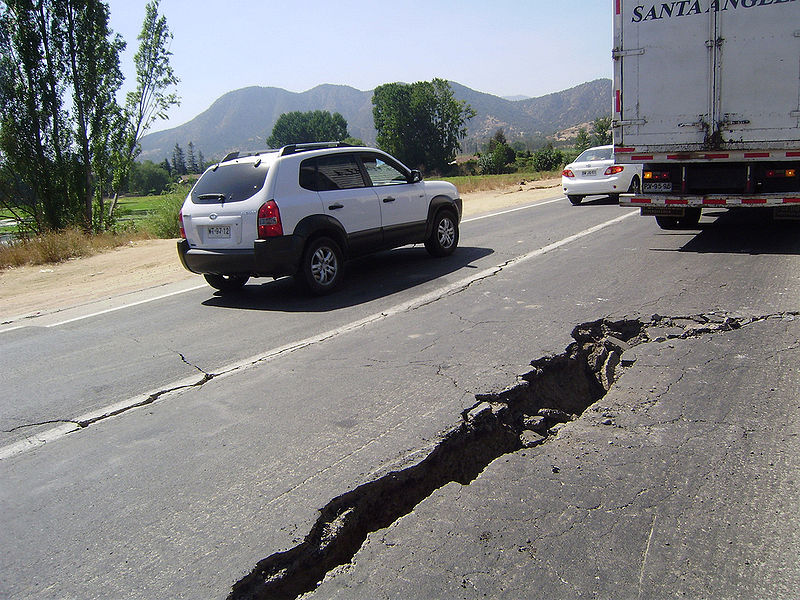 CONCEPCION, Chile — It’s not about the 8.8-degree-earthquake splitting Chile in half. It’s about what the quake revealed in the rubble: that there exists, and has always existed, two Chiles.

One is the Chile marketed abroad: modern, avant-garde, exporter, a country of free trade pacts, an almost First-World nation. The other is the Chile that wasn’t invited to the party, that didn’t board the development bus, that’s home to the poor majorities ignored by the occupants of La Moneda Palace (Chile’s White House) and the unscathed skyscrapers of capital Santiago.

It is the “primitive Chile,” described writer and diplomat Jorge Edwards. It has always been there, he added, but few people ever saw it. Until the earthquake ripped off the veil.

The contrast of these two Chiles was underlined when disturbances erupted here a few hours after the earthquake. The violence surprised everyone.

Thousands from that ignored Chile felt disconnected and totally isolated from the rest of the country and the central government. And they took to the streets looting stores and supermarkets. Some of them, for sure, were after food for their families. Others simply took advantage of the chaos to grab flat-screen TVs and refrigerators in a city that didn’t even have electricity.

Rightly so, many Chileans were horrified at the thievery and looting. But, as filmmaker Jorge Ulla commented, you can’t hide poverty. In Chile, as in the rest of Latin America, the richest 10 percent earns more than half of the nation’s income, while the poorest remain impoverished and can barely survive.

It was these poor people who complained about the absence of aid and were desperately looking for food. They are the ones who were attacked by the army when President Michelle Bachelet finally decided to send in soldiers to control the turmoil and looting a few days later.

Her reticence to give that order was understandable. The army has not been brought out against the people since the brutal era of Gen. Augusto Pinochet (1974-1990). Bachelet’s own father died after months of imprisonment and torture during that military dictatorship.

Chileans’ fear of their army almost seems hereditary. It’s as though it has been genetically passed from generation to generation.

So, it was not an easy decision for her; she hesitated too long. That was her first mistake.

A curfew was imposed that allowed people to be outside only six hours a day to look for water and food. But sometimes the task was impossible. It was incredible to see stores and offices closed for days in one of the country’s biggest cities.

“Not even a bird here flies without authorization,” one of the soldiers deployed here said. He wasn’t joking.

And journalists also were given a hard time. The only way to get into this city was with a safe-conduct permit from the military.

The second mistake was Bachelet’s government not alerting the towns on the southern coast that a tidal wave was imminent after Saturday’s earthquake. The naval authorities have already admitted their error. But it was a big mistake and many lives were lost because of it.

The third mistake was Chile’s show of self-reliance, which disintegrated a few days after the quake. A government official had stated that offers of foreign aid would be studied. He mentioned nothing about accepting them. But that vague and inept response dampened international generosity when lives could still have been saved and the populations in the most damaged areas could have received help.

Bachelet did not say anything about her minister’s statement and it took her six days to explain that in fact Chile never turned down aid from other countries. I suppose that the sight of Peruvian President Alan Garcia offering help — in spite of the two countries’ longtime maritime squabbles and historical tensions — was too hard for Chile’s politicians to swallow.

The fourth mistake came when help wasn’t made available to the people most affected by the quake. I spoke with many here who had lost their homes, were living in the street and hadn’t received even a piece of bread. So, the president’s statement that there had been no interruption in food and gasoline provision was absurd.

The fifth mistake was Bachelet’s paralysis at la Moneda. The earthquake overwhelmed her. And she took too long to visit the worst hit towns and cities.

Now it’s new President Sebastian Pinera’s turn to fulfill the expectations of the people. His job, he said, is not only to rebuild his country, but to do it better.

And he is right. Chile’s fundamental problem is not the cracks caused by the quake or the towns wiped out by the tidal wave. The reality is that part of the population kept pace with the new modernity and did not realize that millions of its countrymen got left behind without hope or chance of ever catching up.

With the collision of tectonic plates, Chilean society has had an advance look at what else might come. The tension caused by inequality has to be diffused.

The challenge for Pinera, therefore, will be to unite those two Chiles. If he doesn’t, the country could experience a jolt even greater than the Feb. 27 seismic shudder.