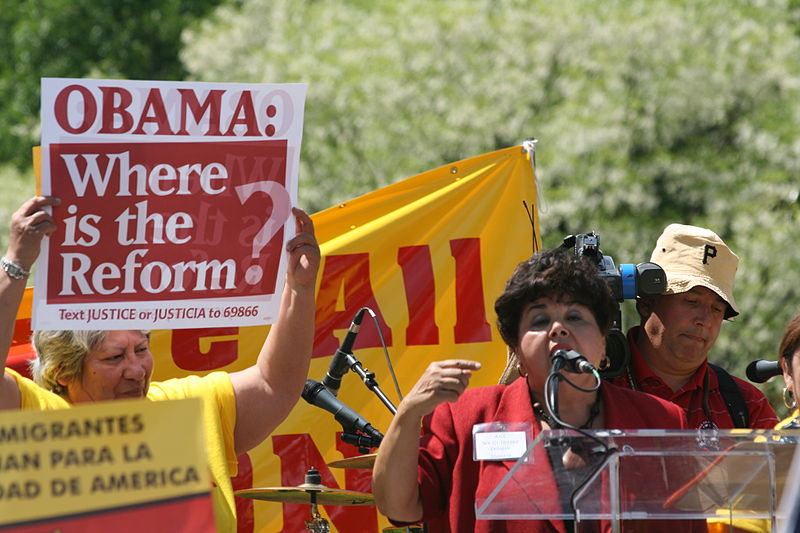 I knew that starting my recent interview in Miami with Archbishop Desmond Tutu with a question about soccer would distract a little from our main topic. But with public excitement about the World Cup mounting, I wanted to know if his home country of South Africa — the first African nation to host the competition — was ready for that challenge.

“Yes, I think so,” said Tutu, with the wide, free smile of a mischievous child. “We got one or two things that we still got to do, but it’s been wonderful to see the stadiums come up and the excitement.”

While the World Cup is important, my primary goal was to get Tutu’s perspective on the current troubles immigrants are facing in the United States. In the `80s, he was one of the most ardent and important opponents of apartheid in South Africa — the brutal system by which the country’s small white minority suppressed and discriminated against the majority black population. For these efforts, he was honored with the Nobel Peace Prize in 1984.

While some might not immediately see the parallels between U.S. immigration law and South African apartheid — which legislated a strict divide between races — I would argue that in practice, the two are surprisingly similar and have some of the same effects: millions living in the shadows, in fear of persecution; taxation without representation; forced deportations that tear families apart; well-paying jobs closed to even highly qualified members of the outsider group. Arizona’s new immigration laws, for example, don’t just promote racial profiling, but are startlingly similar to the internal passport laws used to control where blacks worked and lived in South Africa during apartheid.

Tutu recalled three valuable lessons from the experiences of black South Africans under apartheid that could be of use to today’s supporters of immigrants’ rights.

LESSON NO. 1: MAINTAIN FAITH IN YOUR CAUSE
“What can the Latino immigrants that fight against discrimination in the United States learn from the struggle for human rights that took place in South Africa?” I asked him.

“One, very important, is to know that you will win,” he said. “Injustice can’t continue forever. And when people are unjust and treat others unjustly they suffer as well. They discover later that it was much, much better if we accept one another as members of one family.”

Tutu said it was activists’ and ordinary people’s faith in the justice and eventual victory of their cause — the struggle against apartheid — that made possible the toppling of white minority rule and the transformation of South Africa to a pluralistic country with 11 official languages. “It’s (a way of) saying ‘let’s celebrate our diversity,”‘ Tutu said. “I mean, we’ve said that we are a rainbow nation.”

LESSON NO. 2: PATIENCE
The apartheid system in South Africa is now ended and equality and civil rights for all are enshrined in the country’s constitution, but I told Tutu that during a visit to South Africa I still saw signs of rejection and discrimination against black people.

That change will take time, he said. “You remember how Martin Luther King said you can’t legislate for people to love one another but, he said, it is important that you can legislate to say ‘don’t lynch me.’ You hope that people are going to begin to understand that is better to live in harmony rather than as enemies.”

LESSON NO. 3: HUMILITY IN LEADERSHIP
Tutu likes to speak of “Uvuntu.” What is that? “Uvuntu is the essence of being human,” he explained. “It says: ‘I am a person because you are a person.”‘

The man who introduced this concept of “Uvuntu” to politics was Nelson Mandela, the nation’s president from 1994 to 1999. Mandela — who spent 27 years in jail for his activities in opposition to the white minority — was widely known for his politics of reconciliation and for negotiating with his enemies.

I asked the archbishop: What should other leaders learn from Mandela? “I think it’s a gift that God gives you to be a leader,” said Tutu. “And the great gift is to remember that you are a leader for the sake of the led. You are not a leader for self-recognition. It’s not that you can enrich yourself. You’re there for the sake of the ones that say ‘you are our leader.”‘

Tutu has an extraordinary capacity to make one feel relaxed and at home. That’s why, though we had been talking only a few minutes, I risked asking the toughest question: Which team will win the first game of the World Cup: Mexico or South Africa?

He interrupted me immediately. “Tough luck!” he said. His happy laughter bounced off the walls of the room, and we couldn’t speak anymore. I shook his hand. He held my hand between both of his, fixed his frank, direct gaze on me and said: “May God bless you.” And he kept on laughing.

Share
FacebookTwitter
Previous ArticleDINNER THEATRE AT THE WHITE HOUSE, NOTHING MORENext ArticleTHEY HAVE A DREAM