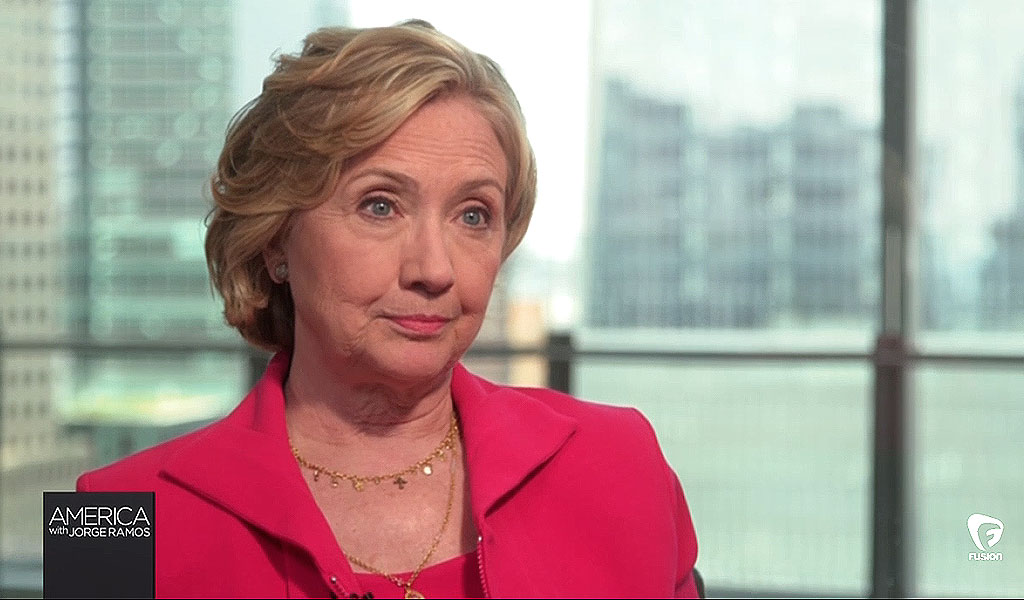 NEW YORK – Lately, the American media has been obsessed with everything Hillary Clinton says and does.

Their interest is understandable: In 2016, Clinton could become the first woman to be elected president. But will she run? That is, of course, the biggest question on everyone’s mind.

“I’m not sure I’m going to run,” she told me during a recent interview in
Lower Manhattan. (Our conversation can be seen at fus.in/1k6r51H.) These days,
Clinton seems to be more excited about becoming a grandmother – her daughter,
Chelsea, is expecting a baby this fall – than about the prospect of being
elected to the highest office in the land. Chelsea is “the best of both of us,”
Clinton told me, referring to herself and her husband, former President Bill
Clinton.

We also talked about her recently published memoir, “Hard Choices,” which
quickly became a national best-seller, although perhaps not as popular as the
publisher expected, given Clinton’s $13 million book advance. Still, not all
value can be measured in dollars. With “Hard Choices,” Clinton is following a
well-worn path that has led other presidential candidates to success: First
publish a memoir, then jump into the race.

I was especially interested in hearing her views on issues south of the U.S.
border – specifically, the waves of Central American children who are journeying
to this country, the consequences of gang violence in Honduras, the deaths
caused by drug trafficking in Mexico and the prospect of ending the American
embargo against Cuba.

As to how the United States should handle the nearly 60,000 Central American
children who have crossed the border in the past year, Clinton told me that
“some of them should be sent back.” I asked whether that might mean a death
sentence for many children who are fleeing violence in their home countries.

“I don’t know that you can make a blanket statement,” she said. “I think some
children have legitimate concerns – part of our problem is our laws are not
particularly appropriate for what we’re facing right now.”

Clinton, who was secretary of state from 2009-2013, told me that each of
these children belongs in one of two categories: “refugee” children feeling
violence, who should receive asylum and protection, and “migrant” children, who
should be treated humanely but should eventually be deported. She also advocates
identifying children threatened by violence in countries such as Honduras, El
Salvador and Guatemala before they embark on a dangerous journey to the United

States and risk falling prey to traffickers, rapists or even murderers.

When it comes to drug violence in Mexico, as secretary of state Clinton dared
to say what other American officials had not: “Drug trafficking is not only
Mexico’s problem,” she said during a news conference in Mexico in 2009. “It is
also an American problem. And we in the U.S. have a responsibility to help you
address it.”

Her critics accused her of apologizing for the U.S., and I asked her if she
regretted making those statements. “Not at all,” she told me. “Mexico was facing
such an onslaught of murder and violence from the drug cartels. And why was that
happening? Because of the drug market in the United States of America, and I
thought it was important to say that.”

I also asked Clinton about her views on relations with Cuba. When Bill
Clinton was president, he never traveled to Cuba. In 1996, when it seemed that
inroads toward a better relationship with the Cuban dictator Fidel Castro might
be possible, two airplanes from the nonprofit Brothers to the Rescue were shot
down by a Cuban fighter jet. After that incident, relations with Cuba hardened.
Now, Hillary Clinton thinks it’s time for a change.

The embargo against Cuba “has been a failure,” she told me, “and it has
propped up the Castros, because they can blame everything on the embargo.”
Ending the embargo would be a good first step. “I would like to see us move
toward the normalization of our relations, she said. “You know, someday, I’d
like to go to Cuba.”

Clinton, who considers herself a “feminist” – which is defined as “someone
who believes in full and equal rights between women and men,” as she pointed out
– certainly seems to be laying the groundwork for a presidential run. Her
potential candidacy may still be the biggest political unknown in America,
perhaps even in the world. But if she ultimately decides to run, nobody will be
taken by surprise.