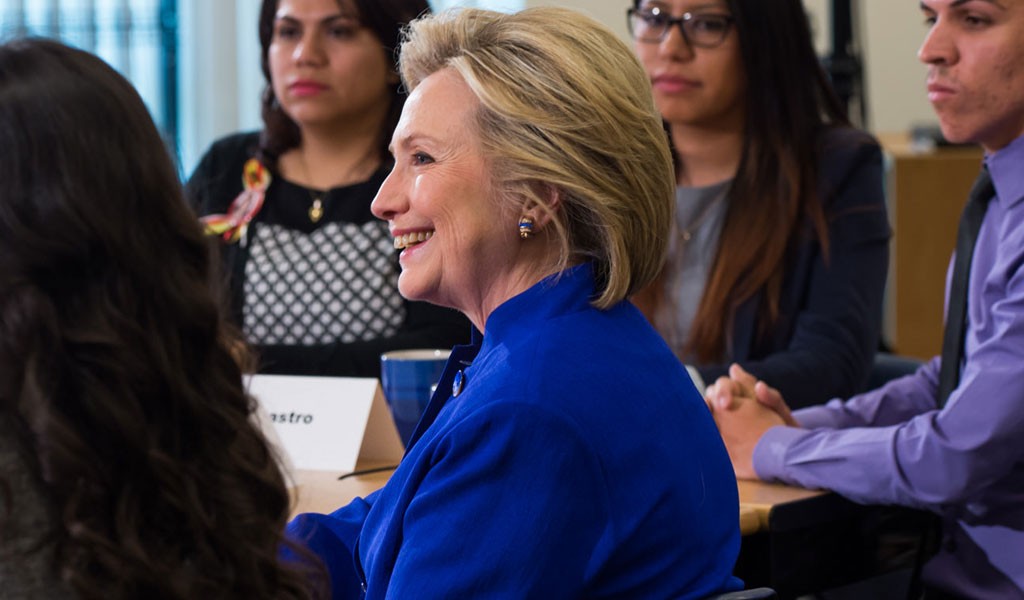 Cinco de Mayo is a bizarre day in the United States.

While many Americans use the holiday as an excuse to don sombreros and go bar-hopping, politicians often use it as an opportunity to talk about Latinos and their growing influence in this country.

This year was no exception. In fact, earlier this month, some presidential hopefuls provided a glimpse into how their campaigns will try to woo the Hispanic community in the runup to the November 2016 election. Republican Jeb Bush, for example, distributed a videotaped message over social media, in perfect Spanish, about how he has learned to love and respect Mexico, the native country of his wife, Columba. And Democrat Hillary Clinton delivered a strong speech, in English, about how she would help the more than 11 million undocumented immigrants living in the U.S.

Clinton’s statement actually went a lot further than many political observers expected. She promised – as Barack Obama did as a candidate in 2008 – to fight in Congress for immigration reform that would offer a path to citizenship to most undocumented immigrants in the U.S. “Make no mistake,” she said at an event in Las Vegas, “today, not a single Republican candidate, announced or potential, is clearly and consistently supporting a path to citizenship. Not one.”

She also said that she would, like President Obama, rely on executive orders if need be. “If Congress continues to refuse to act,” Clinton added, “as president I will do everything possible under the law to go even further. There are more people – like many parents of ‘Dreamers’ and others with deep ties and contributions to our communities – who deserve a chance to stay. I will fight for them too.”

Let’s call that Clinton’s Cinco de Mayo promise. All we need now are the details. If elected, how would she implement her plan? Would she do it in her first 100 days in the White House? Would she stop deportations until an immigration reform bill is passed? Clinton would need to set deadlines and provide effective mechanisms for such a promise to be delivered.

Of course, Obama made a similar promise in 2008, saying that he would have a comprehensive immigration reform bill drafted within a year of his taking office. He didn’t keep that promise, which resulted in widespread criticism from Hispanic groups. This is why many Latinos are skeptical of such declarations from presidential candidates. They’ve heard them before.

But besides the credibility issue, there’s the legal one: If she won, the courts and Congress could still thwart Clinton’s best intentions. If that happened, her Cinco de Mayo promise would evaporate just like many earlier immigration promises that have resulted in absolutely nothing.

However, Clinton’s pledge did set her apart from Republican candidates, and she has put them in a tight spot. Is it possible that Clinton’s plan for dealing with the country’s immigration problem is more inclusive and compassionate than those of Republican contenders Ted Cruz and Marco Rubio, themselves sons of immigrants? Is her proposal broader and more comprehensive than that of Jeb Bush, whose wife is from Mexico?

We need to ask some of these tough questions. Every candidate will have to explain to the Hispanic community what he or she is going to do about undocumented immigrants in this country – and we will be comparing their answers to Clinton’s proposal, and she has set the bar pretty high.

So what will this crop of presidential candidates offer for the Hispanic vote? A few words in Spanish and empty promises may have been enough in years past, but not anymore. We’ve been here before, and we’ve learned our lesson.

Anyone running for president is perfectly aware that Hispanics will likely decide who wins. The math is simple: Obama beat Republican Mitt Romney in 2012 by almost 5 million votes. In 2016, almost 16 million Hispanics are expected to vote in the presidential election, more than enough to send anyone to the White House.

Yes, Cinco de Mayo was a bizarre day, full of encouraging words. But we won’t forget the promises that were made. If you don’t believe us, ask Obama what happens when you make a promise that you don’t keep.