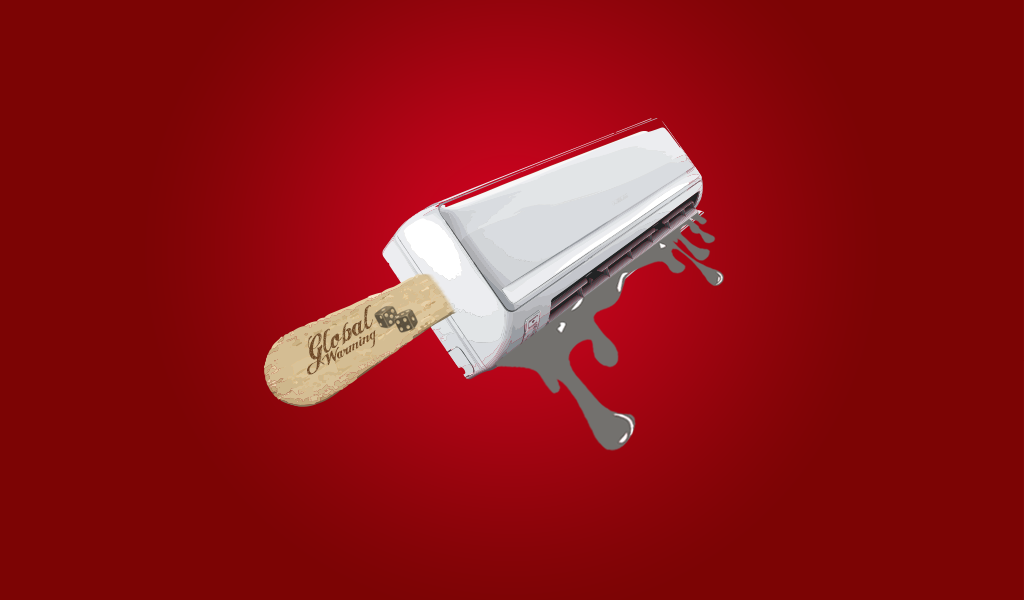 In recent years, I’ve been in some pretty hot and steamy places in the middle of summer — the Caribbean and India, for instance, or Miami, where I live — and I constantly find myself shivering.

As the mercury rises ever higher outside — and more heat records are broken around the world — inside, air conditioners kick on and stay on, sending office towers, homes, trains and airliners into a deep chill. By September, I am eager for fall to arrive.

Generating that cold is quite costly. Because of that, these icy environments amid the summer swelter have become a status symbol in many places around the world, especially where not everyone can afford to keep so cool. For instance, luxury shops that cater to the wealthy turn their thermostats way down and become sanctuaries from the overwhelming summer heat. (Of course, customers pay their share of the power bill through the products that they buy). And I don’t think that I’ve ever been in colder homes than some in Puerto Rico and the Dominican Republic — islands where electricity can at times be prohibitively expensive.

A couple of years ago, I traveled through India by rail to visit the Taj Mahal. As we rolled through the countryside, I could see devastating poverty amid the searing heat. In my first-class coach, however, the temperature was set so low that many passengers were shivering. In fact, I tried to open a window to let some warm air in, but it was locked and bolted. So as the train rolled along, we were all trapped in an icy car. Meanwhile, in the sweaty and crowded second-class coaches, there was no escape from the heat.

Back home in the U.S., every time someone at our TV news studio complains about the arctic drafts blowing through the vents, the response is that nothing can be done about the temperature because our many cameras and computers must be kept cool so they don’t overheat. Not surprisingly, I keep some sweaters and winter coats in a small closet in my office.

Our ability to keep buildings cool — or wintry, in some cases — while the weather outside is oppressively hot is an amazing feat. Unfortunately, it also contributes to distorted perceptions about climate change. Take as evidence the fact that some leading Republican presidential candidates have publicly expressed doubt that humans are responsible for climate change, and have suggested that more study is necessary on the topic before we can know for sure.

This is, of course, absurd. According to NASA, 97% of climate scientists agree that human activity is likely causing climate change. Denying this reality in order to score votes can have terrible, long-term consequences.

Meanwhile, evidence that the climate is becoming more unpredictable keeps pouring in. July was the hottest month on record, and researchers at the National Oceanic and Atmospheric Administration expect that 2015 will be the hottest year on record. It’s impossible to deny the science on this topic.

We also know that if the planet keeps getting warmer, many coastal zones around the world could soon be underwater. A beach I used to visit in Key Biscayne, Florida, years ago has been consumed by the sea — all that’s left today is a small strip of sand and algae.

The same thing is happening in Mexico’s beautiful Riviera Maya. During a recent visit, I noticed that my hotel had lost several feet of white sand to the sea, and water is coming menacingly closer to guest rooms, restaurants and pools. Meanwhile, hotel employees spend all day sweeping away sargasso, an invasive seaweed, from the premises, only to find even more the next day. It’s like a bad movie that won’t end.

What about the fact that the world is experiencing stronger hurricanes? Or that the droughts in California and Puerto Rico seem unending? Today we are seeing larger wildfires and tornadoes that are increasingly violent. On nightly newscasts, meteorologists used to be secondary members of the news staff, but that’s no longer the case. The weather is often so extreme and unruly that it’s frequently the top news story these days.

Given these changes, it’s imperative that we act before climate change is irreversible. Unfortunately, the corporations and nations that are the most responsible for reckless energy consumption and pollution have taken a lax approach to the problem. Like beachgoers who don’t use sunblock and think that a few more minutes in the sun won’t hurt, corporations and polluting countries think that increasing ocean temperatures by a few degrees probably won’t hurt either. They’re wrong.

This summer could be the hottest in recorded history. Ironically, many of us won’t notice because we’re inside, shivering.