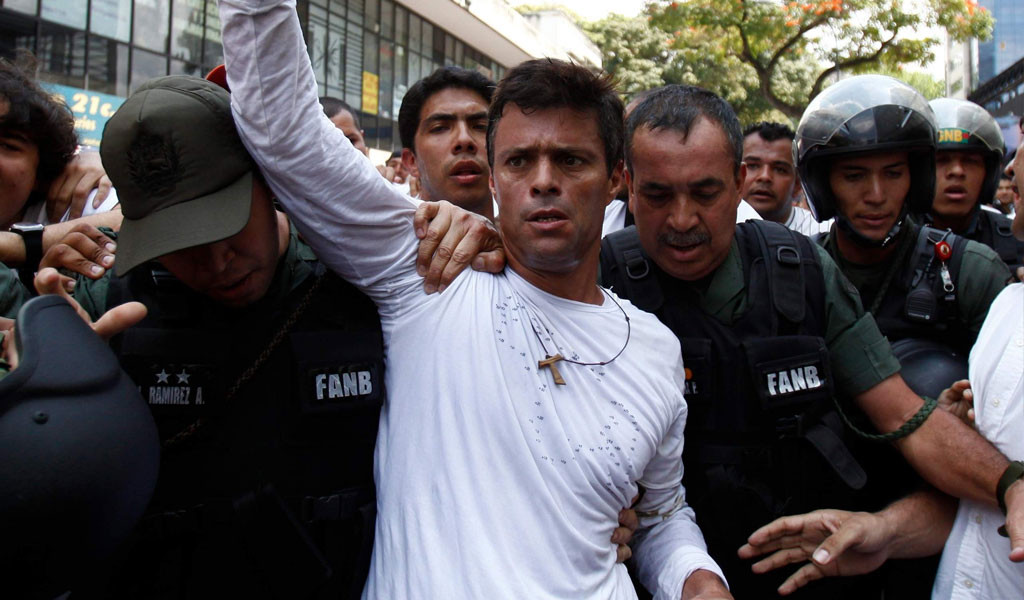 Some books are written with ink on paper; others, on laptops. But a new book by the Venezuelan opposition leader Leopoldo López was partly written on skin.

Since February 2014, López has been locked up at Venezuela’s Ramo Verde prison on charges of inciting riots against the regime of President Nicolas Maduro. His sentence: more than 13 years. Shortly after he arrived, guards were ordered to keep him away from pen and paper so that he couldn’t communicate with the outside. Maduro doesn’t want López’s words reaching the world, but words can escape in other ways.

“His sister Diana wrote paragraphs [of Lopez’s book] on her skin,” Lilian Tintori, López’s wife and a human-rights advocate, told me in a recent interview in Miami. “His mother wrote on her legs … I, too, wrote on small pieces of paper I took with me, or on my own skin.”

These three women would collect any information they could when they visited López, then they’d smuggle his messages out, if they could elude his jailers. The end result is the new book, “Imprisoned Yet Free,” which chronicles López’s first year in prison.

On his first night, he recalls, all he had in his cell was “an old bedsheet and a worn-out mattress.” His conditions haven’t improved since then. “Top-ranking authorities in Ramo Verde treat us like foreign prisoners of war,” Lopez writes. “We’re considered enemies.”

At first he was still allowed to choose his own books to read. He managed to accumulate about 300 books in his cell. Now he’s only allowed three at a time.

Tintori, who visits him twice a week, told me that Lopez is being tortured. She detailed the daily strip searches that he has to endure. “They force him to get naked 10 times a day, in his cell, where’s he’s alone,” she said. “With no reason whatsoever — they do it to torture him, to break him.”

But authorities haven’t broken Lopez’s spirit. “Since I arrived at Ramo Verde, I realized my main battlefield would be in my mind and my mood,” Lopez writes. “If I am fine, my family is better, and my political team is more motivated.”

In prison, Lopez tries to maintain a routine: He wakes at 5 a.m., makes his bed, has coffee, prays, works out and practices boxing with another inmate. By midmorning he starts what he calls his first “batch” of reading. Discipline marks the rest of his day. His mantra: “He who gets tired, loses.”

In 2014, when a warrant was issued for his arrest, Lopez went against the wishes of his family and supporters and turned himself in to authorities. His release from prison now hinges on the election of a new government. “Nicolas Maduro is the one who keeps Leopoldo in jail,” Tintori told me. By her count, there are 108 political prisoners behind bars in Venezuela.

Meanwhile, Tintori and Venezuelan opposition leaders are pushing for a recall referendum in order to remove Maduro from office. But the administration is doing all it can to invalidate the referendum, or at least postpone it until next year. Meanwhile, Venezuela’s political and economic situation grows more dire.

“We’re talking about a dictatorship in Venezuela,” Tintori said. “[Maduro] is a dictator. He’s responsible for the social, political and humanitarian crisis in Venezuela. He knows that in Venezuela there is no food, no medicine. But there is violence — one Venezuelan is killed every 18 minutes. He knows this, and has done nothing to make things better.”

As pressure on Maduro’s government has grown, jail conditions for Lopez have worsened. In addition to forbidding him from expressing himself through any sort of writing, authorities barred family phone calls for two months, Tintori told me. “They lock him up every night at 8 o’clock, without light, and he’s not even allowed a candle or a lamp to read,” she said.

Jailers have also found ways to prevent Tintori and other family members from communicating on behalf of Lopez. “Now, at the inspection, [guards] scrub our skin with alcohol so we won’t be able to write anything on it,” Tintori said.

But the damage to Maduro has been done. The book is published, and Venezuela is rebelling against the regime. When the time is right, nothing can stop an idea from circulating.