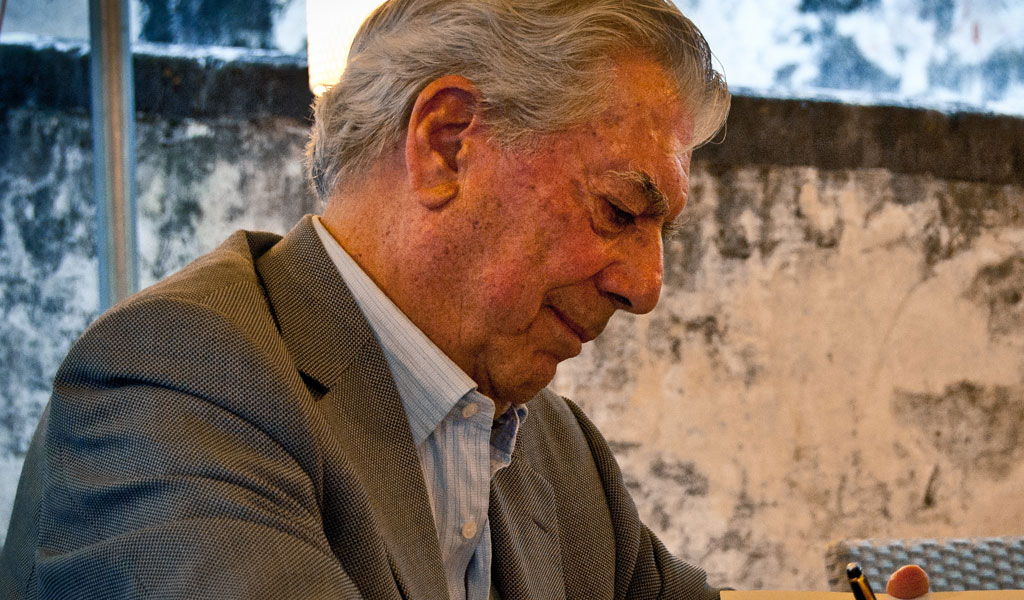 MADRID – “I don’t use Twitter. I don’t use Facebook. I don’t answer the phone. I don’t open my door,” Mario Vargas Llosa told me.

The Peruvian author, who won the Nobel Prize in literature in 2010, spoke candidly during a recent interview in the library of his apartment here. “I have a wonderful woman who does all that stuff for me, and that enables me to basically devote myself to what I like – which is reading and writing.”

In addition to eschewing social media, Vargas Llosa also has no use for Google, preferring to consult the half-dozen dictionaries on his desk when he needs to look something up. “For me, modernization is a nightmare,” he told me, echoing the sentiments of his book “The Civilization of Spectacle.” “Eighty or 90% of all tweets are monstrosities, absurdities, fodder for the unoccupied.”

In fact, the Nobel laureate even tries his best to avoid even using terms like “tweeting” and “Facebooking.” “Those sound like bad words,” he said, “obscene, vulgar, ugly ones; they all sound like they were borrowed from other languages.”

While Vargas Llosa, now 78 and the author of more than 20 novels, appreciates that many readers adore his work, he hasn’t taken to fame and he certainly doesn’t want any statues erected in his honor. “The Nobel Prize turns you into some kind of public figure,” he said, before listing the accolades, cocktail parties, honorary degrees, committee invitations and interviews that he has turned down in order to focus on writing. “I’m not complaining over getting the Nobel Prize – I’m very happy about it – but now I have to spend more time protecting my time.”

I have to admit that I felt like I was robbing Vargas Llosa of time during my visit, but I set aside my guilt and spoke to him for an hour. I had traveled to Madrid to speak with him about the television adaptation of his 2000 novel “The Feast of the Goat.” The book focuses on the life of Rafael Leonidas Trujillo, the brutal dictator who ruled the Dominican Republican from 1930 to 1961.

I asked Vargas Llosa about Trujillo, who was shot to death in his car in 1961, and whether he felt that it was acceptable to kill dictators. “I think so, and a dictator such as Trujillo, without doubt,” he said. “I think that [his death] was a great liberation for the Dominican Republic – to free itself from such a cruel man, such an unscrupulous assassin.”

I then asked him about Cuba. Does he consider Raul and Fidel Castro to be dictators? “Absolutely,” he said.

So would the killing of the Castro brothers be justified, like the assassination of Trujillo? Vargas Llosa paused for a moment before answering. “Look, I think you have to study the context in each case,” he said. “I can’t say what should be done in Cuba’s case because I’m not there; I don’t live inside the country.”

I also asked for his views on Venezuela and President Nicolas Maduro, the nation’s Chavista leader. “Nicolas Maduro is a dictator,” he said, unambiguously. “Maduro resorts more and more on repression in order to fight the opposition. He’s closed any space for criticism.” He continued: “Venezuela has the highest inflation rate in the world. The country has become very violent. Corruption . has increased social inequality. Television is totally controlled by the government . It’s a total failure.” Nonetheless, he said, “I know a lot of opposition leaders, and none has said that Maduro should be killed. They believe – with good reason – that there’s still a chance to resist the dictatorship within the bounds of the law.”

When Vargas Llosa lobs criticism at politicians around the world, they listen. In 1990 he famously described the long, abusive reign of the Institutional Revolutionary Party, or PRI, in Mexico as being “the perfect dictatorship.” A decade later, true democracy arrived in the country. “[The dictatorship] wasn’t that perfect, luckily,” Vargas Llosa told me with a smile. “But that was mainly due to someone from the PRI who dared betray his own party – that someone was (former President Ernesto) Zedillo. I really admire Zedillo.”

Now that the PRI is again in power, is Vargas Llosa worried about a comeback for the perfect dictatorship? “I don’t think it will return,” he said. “Yes, there are mobsters within the PRI; without a doubt, the party is still full of mobsters – but those mobsters must be very careful now because there are real opposition parties.”

A staunch critic of many political leaders, Vargas Llosa himself ran for president of Peru in 1990, but, he said, he wasn’t a very good candidate. “To tell you the truth, I didn’t want to be president. I was pushed by circumstances to seek a role in politics, something I’ve never dreamed of or wanted.”

Despite losing that race to Alberto Fujimori, Vargas Llosa has remained active in Peru’s political scene, and these days he is working to make sure that Keiko Fujimori, Alberto Fujimori’s daughter, does not become president in 2016. “Keiko is the daughter of a murderer and a thief who is in jail,” he told me. “I
don’t want his daughter to win the election – the first thing that she would do if she takes office is release her father from prison. So, of course, I will oppose this.”

During our conversation, I had to mention Vargas Llosa’s notorious conflict with the late Colombian author Gabriel García Márquez, a fellow Nobel laureate. With regard to the fight they had in 1976, which famously left García Márquez with a black eye, Vargas Llosa said: “I made a tacit . pact with García Márquez not to speak about this topic, which only interests morbid people and gossips. He respected the pact and I, too, will respect it until the end.”

I also asked Vargas Llosa what he is reading these days. “I read more dead writers than living writers,” he said. “And now I do something I never did before: If a book is unable to grab my attention, I drop it and don’t finish it.”

He counts the Spanish writer Javier Cercas among the living authors whose work he does read. “To me, he is one of the greatest contemporary writers – unfortunately, he is not as widely recognized as he should be.” And, he noted, “A novel was published recently in Peru that I found very ambitious, a little
countercurrent by Jeremías Gamboa: ‘Say Everything.'”

I made the mistake of asking about the Japanese writer Haruki Murakami, who writes global best sellers. But Vargas Llosa quickly answered: “I don’t like Murakami. I find him frivolous. I think he is terribly shallow.”

Toward the end of our discussion, we touched on more personal topics. Vargas Llosa, who is an agnostic, told me he doesn’t think he’ll reconsider his views on God, the way the Argentine author Jorge Luis Borges did before he died. “I’m not afraid of dying,” Vargas Llosa said. “I think death is responsible for the
best things in life. If there was no death, life would be so boring.”

I also asked him why he writes. “Because, as Flaubert said, writing is a way of life,” he told me. “My entire life is organized around what I am writing and what I will write. I can’t conceive of a different life.”