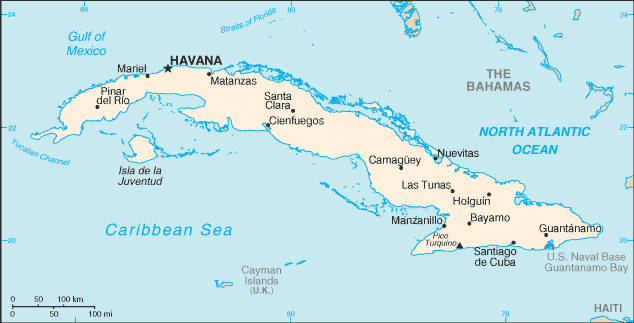 On Twitter recently, Cuban blogger Yoani Sanchez asked, “Why do most of Latin
America’s governments remain silent about what’s happening in Cuba? We need
their solidarity.”

Sanchez posted this question from Havana on her Twitter page (yoanisanchez)
March 14.

Up to that moment, all of Latin America’s governments, in a guilty and
gutless way, had kept quiet regarding the death last month of jailed political
dissident Orlando Zapata Tamayo, and about human rights violations in Cuban
jails. A lot of time passed before any criticism emerged from the region.

On Feb. 23, when Zapata Tamayo dies in Havana after an 86-day hunger strike,
there is a photo of the 32 Latin American and Caribbean leaders at the Cancun
Summit in Mexico, all smiling — including Raul Castro. But not a word is
uttered about the life and death of Zapata Tamayo.

Possibly the leaders didn’t know at the time that Zapata Tamayo had died. But
the press had already reported widely about his precarious state of health.

Then came the worst, and unexpected criticism: from Brazilian President Luiz
Inacio Lula da Silva, on a visit to Cuba, who far from condemning the
circumstances of Zapata Tamayo’s death, justified them.

“Hunger strikes cannot be used as a human rights’ pretext to set people
free,” he told the press when he returned to Brazil. “Imagine if all the bandits
now incarcerated in Sao Paulo started a hunger strike to demand freedom.”

Bolivian President Evo Morales was even more explicit. He called Zapata
Tamayo a “delinquent” even though Morales himself was once jailed in similar
circumstances for his own political way of thinking.

“This is a Cuban internal issue,” Morales said, “but it becomes an
international scandal when a Cuban on a hunger strike dies.”

El Salvador President Mauricio Funes’s government could not have chosen a
less opportune day to reopen the country’s embassy in Cuba. If it had gone
without an embassy there for 48 years, couldn’t it have waited for a more
appropriate moment?

Neither the Salvadoran foreign minister nor first lady Vanda Pignato — who
cut the ribbon at the embassy’s opening — dared even mention Zapata Tamayo or
Guillermo Farinas, another dissident who had already commenced his own hunger
strike. When Funes visits Havana soon, we’ll see if he dares ask for the same
freedoms for Cubans as he seeks for Salvadorans.

There are 247 political prisoners in Cuba, according to Elizardo Sanchez of
the Cuban Human Rights and National Reconciliation Commission, a group made up
of dissidents opposing the Castro regime.

The majority of Latin American governments, however, have yet to speak up on
the subject of Cuba’s jailed political dissidents.

The first courageous leader to break the silence was Chile’s new president,
Sebastian Pinera, who condemned the death of Zapata Tamayo and called for a
transition to democracy in Cuba.

Mexico came next: “Mexico exhorts the Cuban government to take necessary
action to protect the health and dignity of all its prisoners,” declared the
Ministry of Foreign Affairs tepidly. The statement was not as forceful as
Arias’s, but it put Mexican President Felipe Calderon’s oft postponed trip to
Cuba at further risk.

Other statements — either weaker or stronger — came later. But what should
be underlined is that two political dissidents, Zapata Tamayo and Farinas,
changed the way the world sees Cuba.

Today no one can deny that Cuba is a dictatorship which tortures and kills
anyone who dares to think differently and opposes the party line.

What we want, Farinas told me in a phone interview from hospital, is “to show
the world the cruelty, the criminal essence of the Cuban government.”

Yes, Cuba can change from the inside. That is what Farinas, Zapata Tamayo,
Yoani Sanchez and the Ladies in White (a group of women in Cuba who are fighting
for the freedom of dissident family members in jail) are demonstrating. When
that occurs, Latin America cannot — must not — remain silent.