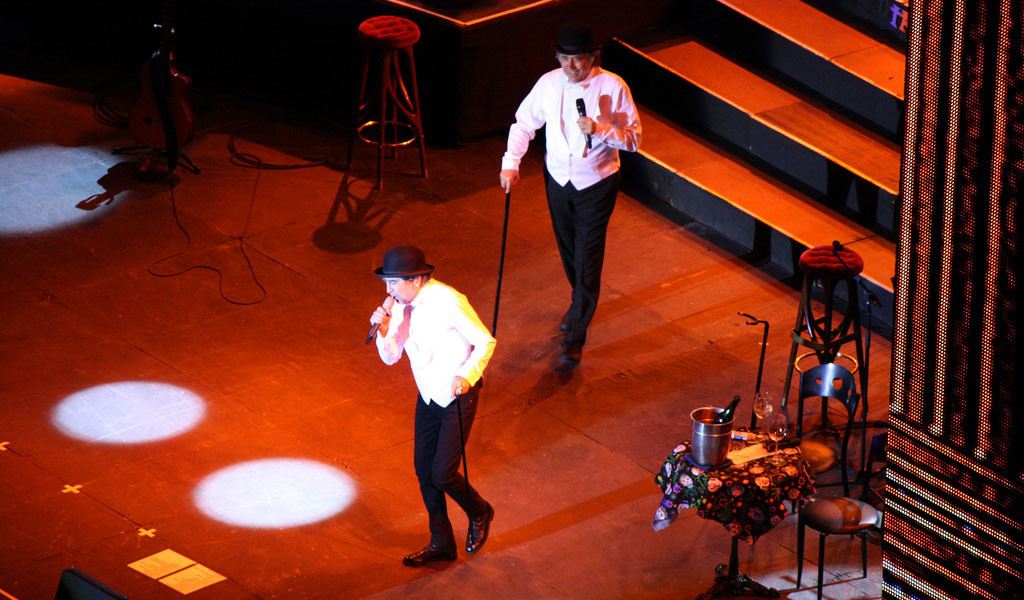 There they were, two of my musical idols, just a few feet away: Joan Manuel Serrat, whose music has been part of my life’s soundtrack, and Joaquin Sabina, whose lyrical realism and irony have inspired me for about a decade. I had great seats for their show in Miami, and I was delighted to be there. But something felt off.

I was surrounded by thrilled fans standing and dancing, but rather than watching and enjoying the show, many were recording it with their phones or taking snapshots of the singers. Serrat and Sabina, of course, were aware of what was happening. How sad, I thought: These great artists came all the way from Spain just to sing to people’s cellphones.

Last October, a couple of years after that show in Miami, I interviewed Serrat and asked about that night and this growing tendency for fans to experience a show almost entirely through their phones. “It’s not right,” he told me, although this sort of behavior happens at every concert, he pointed out. Serrat thinks that when people watch a performance through their phones, they’re missing out on something real. “When I attend a concert, I want to see it live — it’s better to see things live,” he said.

Of course, today it’s common to go to a concert and see many fans holding up their phones and recording. Apparently not much can be done to dissuade them. I recently spoke with Mario Domm, of the Mexico-based duet Camila, who told me that when he once asked fans at a concert of his to put away their phones during a song, he got a hostile reaction. Domm never did that again.

It’s becoming painfully obvious that there are times that we’d rather pay attention to our phones than to the people we’re with. Last year, according to research from Pew, 89% of Americans said that they used their phones during a recent social function. And 76% say that they never, or almost never, turn their phones off. In another study, Common Sense Media reported that half of American teenagers feel addicted to their phones. (See the study results here: bit.ly/1Y5Wcd5.)

While today’s teenagers might feel too connected, my problem as a teen was feeling unconnected. I remember when my father managed to have a phone installed in our home in Mexico after several years of jumping through bureaucratic hoops. Eventually, my three brothers and sister and I all had to wait our turn to use the phone. Today, the phone is in my pocket, and it takes discipline not to use it.

In principle, most of us abhor the idea of ignoring friends and family members at social events to look at our phones, but we all do it, and that’s hurting us.

Consider phone snubbing, or “phubbing,” as it’s called. Rob Wile, a commentator at Fusion, recently wrote a column about how this behavior affects romance (read it here: fus.in/1RoDbii). Wile cites a survey conducted by Baylor University in which 46% of respondents said that their partner has ignored them at some point to focus on a phone. And 22% said that phubbing was causing problems in their relationships.

The simple truth is that today nobody is surprised to arrive at a social gathering and see most people holding their phones or placing them on the table in front of them. And have you noticed how some people react when they lose their phone? It’s like a death in the family.

We’re linked more than ever through our phones. However, we should remember that an entire life won’t fit inside a phone, and there are experiences that a phone just can’t capture.

Meanwhile Joan Manuel Serrat will keep doing his part to resist the phone addiction. During a recent concert, Serrat noticed a man videotaping him while he sang. He paused the show and asked him: “How’s the taping going? Wouldn’t you rather see the concert live?”