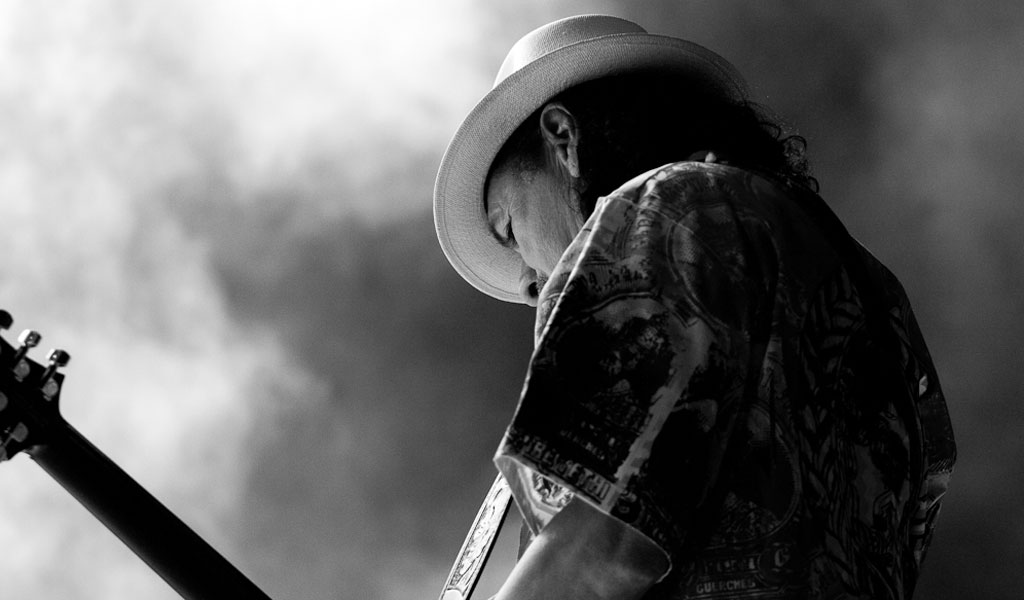 The World Cup will end on a high note when the brilliant guitarist Carlos Santana performs at the closing ceremony in Rio de Janeiro.

Though he hates FIFA’s game protocols, Santana will rock the planet with his magical fingers; he might even take the opportunity to make a statement, which will be more spiritual than musical.

I spoke to him recently, during a promotional tour for his latest album, “Corazón,” which features performances by several Latin American artists. Though it is high on the charts in several countries, Santana didn’t want to talk about record sales – or even soccer. He had nationalism on his mind.

“We use music to unify this planet,” he told me when we met in May. “We need to put aside the concept of patriotism, because patriotism is prehistoric.” That idea, of course, runs counter to the World Cup’s monthlong exhibition of patriotism. As 32 nations competed, there were displays of deep-rooted forms of nationalism both on the field and in the seats.

But the musician, whose hits like the song “Oye Cómo Va” and the album “Supernatural” have broken records worldwide, insisted on his point: Unity, not division, should be the focus of an event like the World Cup. “A positive thought creates thousands of positive vibrations,” he said. “Only those who see the invisible can do the impossible.”

When we spoke, Santana was dreaming about bringing together Pope Francis, the Dalai Lama and several presidents, including Barack Obama, for a peace conference. I believe that idea faded, but at the closing ceremony, Santana will improvise a revolution with the fastest fingers in rock ‘n’ roll.

What is it that he does onstage? “I call it taking my fingers for a walk,” he said. “I don’t want to lose the glee. . I didn’t have a childhood. I was a child when I was already helping my dad in Tijuana make money to feed my four sisters and my two brothers.” The 66-year old says he feels like he’s 14 when he plays the guitar.

I asked if I could look at his fingers, expecting them to be calloused, scarred and crooked after a lifetime of work. Instead his fingertips are rounded, the shape of his fingers impeccable, as if he had never touched a guitar. They are like Pelé’s feet – a wonder of the world.

This World Cup brings the two men together, in a way. The year 1969 was very important for both of them – one entered the history books with his fingers, the other with his feet. Santana became a legend at Woodstock, while Pelé, in turn, scored his 1,000th goal that year. He was playing for Santos FC, a Sao Paulo team, against CR Vasco da Gama on their home turf, in Rio’s Maracana Stadium.

Pelé was the greatest soccer player who ever set foot on the field. I know this is an entirely subjective judgment. He marked my childhood, as he did that of millions. His first goal against Italy, in the final match of the World Cup in Mexico, in 1970, is engraved on me like a tattoo. The only person to have won three World Cups during his career, his feet were a magnet for the ball. Once he was on the field, it was impossible to take your eyes off him.

I’m obliged to mention that others believe that the Argentinian player Diego Armando Maradona was the greatest, and according to a poll FIFA conducted in 2002, he scored the best goal in history. In the 1986 World Cup, in the quarterfinals, Maradona took on almost the entire British team, starting from the center of the field, and scored. These days, Lionel Messi, Neymar and James Rodriguez put on a good show, but they are not yet as strong as Maradona and Pelé. (This cup has also confirmed what I’ve always said: that the Latin American style of playing soccer is much more fun than the buttoned-up European approach.)

Whatever the outcome, this Brazilian World Cup is historic. Not just because of the goals, or the terrific performances by the goalies – Guillermo Ochoa of Mexico, David Ospina of Colombia, the American player Tim Howard, the Costa Rican player Keylor Navas – or the unexpected losses (whatever happened to Spain, Britain, Italy and Portugal?). This Cup has truly brought us together, and promises to break every record.

Because of my job, I’ll be lucky enough to attend the final match at Maracana. I’m bringing my son, Nicolas. I want him to know that Santana’s fingers, Pelé’s feet and a well-played game of soccer are matchless gifts, and seeing them is one of life’s great pleasures.

Just as Santana is hoping, such joys unite us – and that is perhaps the best kind of peace conference.