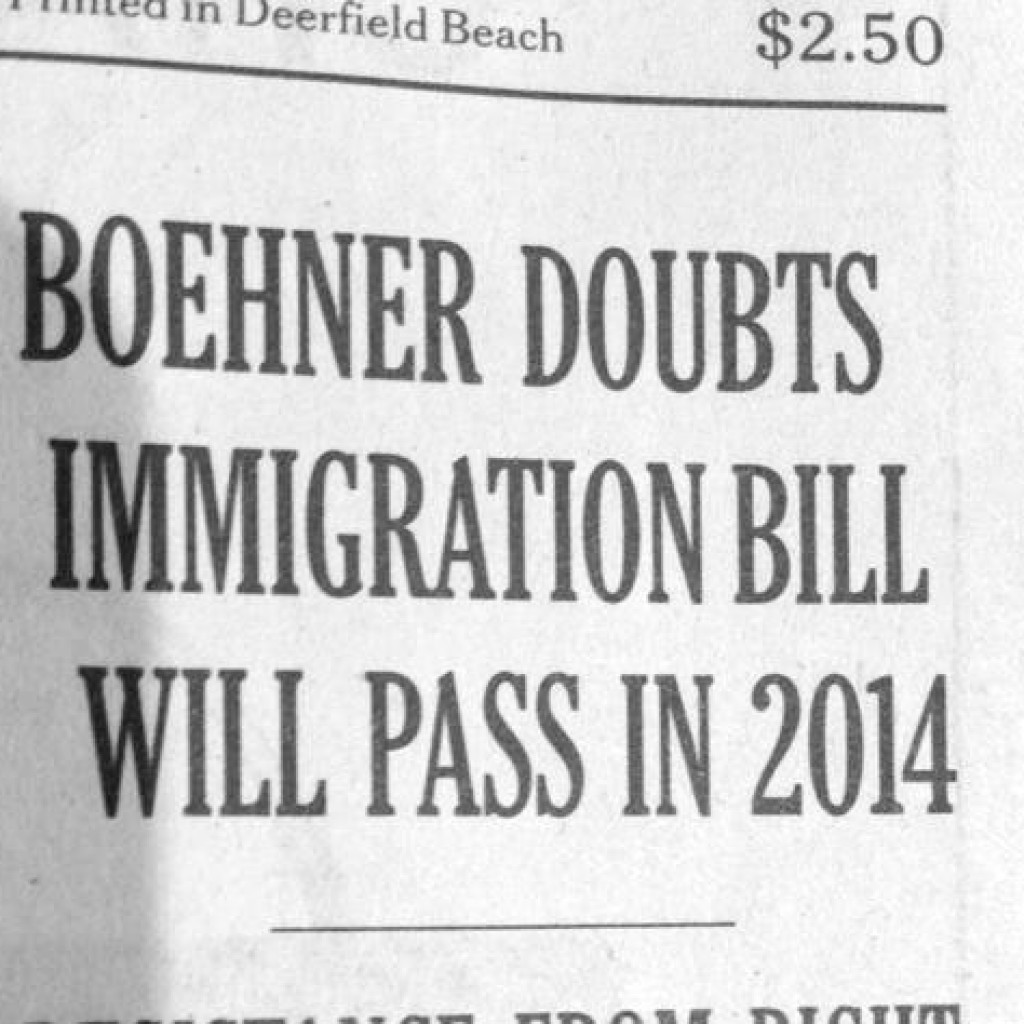 Last year, Republican politicians told Hispanics and undocumented immigrants living in the United States that in 2014 they would be keen on passing legislation that would reform the nation’s immigration laws.

There were some hopeful conversations, and optimism began to rise. Would this be the year that the GOP finally came to its senses with regard to immigration?

Not a chance. It was all a false alarm. A ruse.

Unsurprisingly, the Republicans have backtracked. They are no longer interested in making a deal with Democrats on this issue, which means that the 11 million undocumented people living and working in the United States will remain in limbo for the foreseeable future. It also means that a Republican will not be elected to the White House in 2016.

Here’s the story so far:

Last year, the U.S. Senate, where Democrats hold the majority, passed a draft bill that would offer a path to legalization for most undocumented immigrants. It was sent to the Republican-controlled House of Representatives, where the legislation hit a wall when leaders decided that it would not be acted upon.

In January, in response to the criticism that followed, John Boehner, the Speaker of the House of Representatives, and other Republican lawmakers released a list of principles that they consider essential in crafting any legislation that deals with immigration. The list included standard items, such as increasing security measures at the border between Mexico and the United States, providing more visas for immigrant workers and building better tracking systems for people entering and exiting the country. The key point on the Republicans’ list, however, was their intention to provide most undocumented immigrants with legal status, but not a path to citizenship.

Following the release of the list, many commentators and analysts, myself included, were optimistic that progress on immigration reform might finally take place. After all, the Republicans had come up with what seemed to be a middle-ground solution to what had been a sticking point in the debate so far – whether to offer citizenship to people who, in the eyes of the law, had broken the rules when they crossed the border. During a recent interview with CNN, President Barack Obama was asked whether he would veto a bill that did not include a path to citizenship. “I’m not going to prejudge what gets to my desk,” he said, signaling that he would be open to the Republicans’ option.

But earlier this month, progress ground to a halt.

Sen. Mitch McConnell, the Republican minority leader in the Senate, declared that the immigration problem could not be solved this year, citing an “irresolvable conflict” between the Senate and House in their different approaches to reform. Then the tea party

-backed Republican Rep. Raul Labrador said in an interview that if Boehner pushed to get a deal passed, he ought to lose his post. Of course, Boehner caved to the pressure and backed off.

Immediately, every Republican returned to the party’s favorite talking point: The failure of immigration reform is President Obama’s fault. “There’s widespread doubt about whether this administration can be trusted to enforce our laws,” Boehner said during a news conference earlier this month. “It’s going to be difficult to move any immigration legislation until that changes.”

To be clear, the blame for the failure of immigration reform lies with Boehner and the Republicans. They believe that they will be able to reopen discussions on immigration in 2015, but they are wrong. In a year the nation will be in the midst of a cutthroat presidential campaign, and no politician will be willing to move on this issue.

This means that the specter of immigration reform will return to haunt the GOP, and their candidate will lose the Hispanic vote in the 2016 presidential election, just like Mitt Romney did in 2012.

Republicans’ lack of action will also affect the Obama administration’s policies. In the next few months, pressure will mount on the president to halt the deportations of undocumented immigrants who have committed no crime. He has said in the past that he does not have the authority to singlehandedly stop deportations, though he has been able to stop them for the Dreamers – young undocumented immigrants brought to the United States by their parents – by implementing so-called “deferred” actions. Some commentators and lawyers have suggested that if Obama can stave off deportation for the Dreamers, then he can do so for their parents, neighbors, classmates and co-workers too.

The bottom line is that at some point Obama must reconcile his contradictory positions. He agrees that the nation’s immigration laws need to be revised, yet almost 2 million immigrants have been deported during his presidency – so the situation for the undocumented grows more desperate.

The Republicans, who could have helped them, have turned their backs. Their interest in reform was only a hoax – one we will remember.