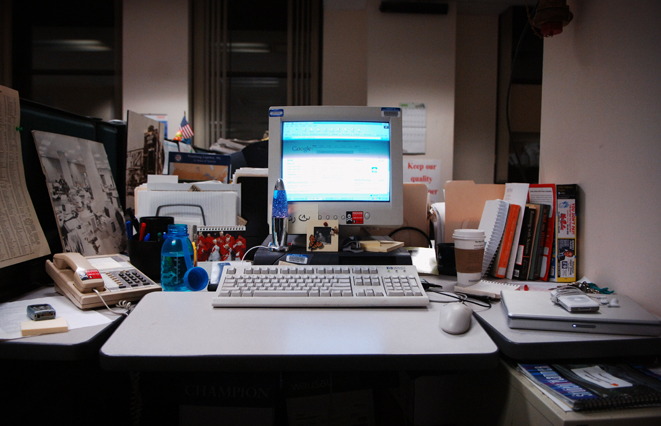 In times like this, it’s easy to hear that journalism is dying. Newspapers are folding. Social media is everywhere. And everybody -I mean, everybody- has an opinion and is publishing it. Every single public space is filled. There is no silence.

In the mornings when I open the paper editions of The New York Times, The Miami Herald and the Spanish newspaper El País and I frequently cringe when I notice that they didn’t include a major story that unfolded the night before. Meanwhile, on the internet, the same story has been playing for hours. And some websites even have instant surveys asking if you agree or not about…well, about everything: race, religion, music, politics and sex.

Twitter and Facebook are, literally, everywhere. And we are not. We can’t be. Since Janis Krums sent that famous tweet on January 2009 about the emergency landing of a US Airways flight on the Hudson river, we have to recognize, with humility, that potentially there is a photographer and a reporter in every cell phone.

Why do we need to send a foreign correspondent to Syria, Lybia, China and Venezuela if Instagram is full of pictures hours and even days before they can do in site reporting? Why travel if there is always someone there with a camera, a computer, a cell phone or an i-Pad doing what we are supposed to do as reporters?

For many the concept of investigative reporting is to read the first couple of paragraph of Wikipedia. Do you have a question? Google it.

For a moment it would be easy to conclude that journalism is dying, that it’s cheap and that everybody could be a reporter. But let me tell you something: that is not real journalism.

I’ll argue tonight that journalists, real journalists, are more important than ever before and that it is very difficult to find a good one.

We need good journalists to make the difficult transition from paper to the internet. We are still in the process of finding out how to do it, competing with millions of websites dedicated to spread rumors and, at the same time, make a little money to survive.

We need good journalists to put aside spam and the tons of information that we find on the internet and that nobody knows if it’s true or not.

We need good journalists to be our eyes and ears in the most difficult spots on earth. Yes, the world is flat because of technology and the idea that borders are to be crossed, it doesn’t matter if you are talking about information or commerce. But only a good and seasoned foreign correspondent can report about a conflict, include all points of view, interview the principals, put it in context, send the story for many different platforms and do it all without getting killed.

But it is not that easy. More than 80 journalists have been killed in Mexico during the last decade. And their killers, in most cases, are free today. Mexico is, right now, one of the most dangerous countries in the world to be a good journalist. Nevertheless, I still get inspired by the thousands of students of journalism in Mexico’s universities. Mexico, believe me, deserves a better future and we will have it.

I didn’t study real journalism in any school. I learned it from two great women.

One of them, Mexican writer Elena Poniatowska, was so brave that she was the one of the few that reported about a massacre of hundreds of students by the Mexican army in 1968. She defied the strict censorship that ruled at the time only equipped with a big tape recorder and the huge conviction that if she didn’t report about what happened, nobody else would. Her book The Night of Tlaltelolco is the work of a titan, a real reporter, even though she is only five–feet tall.

And because of her style, she never expected to interview anybody twice. From her I learned that it is not the same to interview a dictator than the victims of his dictatorship. That principle applies to Cuba but also to Arizona.

My interviews with sheriff Joe Arpaio are very different than the ones with the Latinos detained by his agents simply because of the color of their skin and their accent. We have to keep them honest.

Oriana Fallaci and Elena Poniatowska remind me all the time that the only place to be for a reporter is as far away as possible from power, the powerful and government. When I see on TV the White House Correspondents’ Dinner with the president, it’s hard to believe that their job is to ask the tough questions from the commander in chief.

I’m truly convinced that our most important social responsibility is to speak truth to power and to prevent the abuse of the powerful. If we don’t ask the tough questions nobody else will. If we have a choice between being a friend or an opponent of someone with power, chose the latter. We’ll never be wrong if we question instead of applauding. And question everyone: that my idea of bipartisanship.

I can’t help to notice that I’m the first Latino to win this award. Most of the work that I do is in Spanish. The reality is that nowadays many of the things that we do in Spanish go directly to the mainstream media in English. The best example is the meetings that we had with the both Presidential candidates this week.

It is true, no apologies; we try to give voice to the voiceless in this country.

Since the Hispanic community is seriously underrepresented politically –we are 17 percent of the population but we only have 2 senators- many times if falls on us, Hispanic journalists, the responsibility of portraying fairly (and even defending) a group composed by millions of undocumented immigrants, a tragic number of students who are not finishing high school, and way too many families living in poverty.

So, yes, we are guilty of practicing journalism with a point of view, with a Latino point of view. For us it’s a very simple proposition: if we don’t talk about the plight of Latinos and immigrants in this country, nobody else will.

That’s why we have criticized President Obama for not keeping his promise about an immigration reform during his first year in office and for deporting more immigrants than any other president in history. And, at the same time, we have criticized Governor Romney for being the first Republican candidate in three decades who opposes immigration reform and for supporting the idea of self-deportation for millions of immigrants. If we don’t do it, who will?

Yes, it’s controversial to practice journalism with a point of view, but we are not the first ones. Edward R. Murrow defended his point of view again McCarthy. Walter Cronkite fought the Vietnam war on television. And even more recently Christiane Amanpour changed the way we saw the war in the former Yugoslavia and Anderson Cooper exposed a government that didn’t do a “heck of a job” after hurricane Katrina.

So, it’s true. We practice journalism with a point of view. As a matter of fact, in times like this, that’s the only way to fulfill our responsibilities. Good journalism has never been about ratings or being invited to a party.

At the end, good journalism is simply a matter of credibility and trust. People believe you or they don’t. But it’s not magic. Credibility comes from saying what you see, being there, reporting with balance and confronting those who are in power.

If we do all this, people will trust us. And that’s all that we need. The rest will come along.