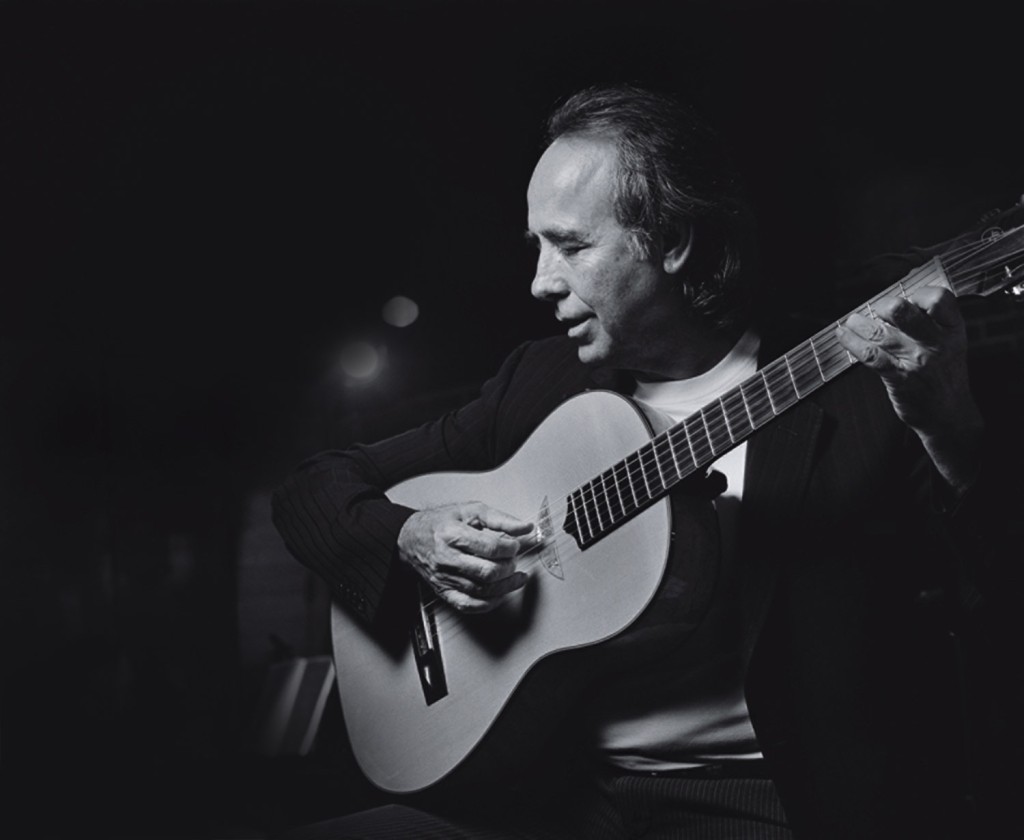 Throughout his 50-year career, the Spanish musician and songwriter Joan Manuel Serrat has navigated countless paths — and his timeless songs have been with me through the years as I have traveled on my own paths.

In fact, his music has become an essential component of my life’s musical score. Understandably, I was thrilled to book an interview with him recently.

When he arrived for our discussion, I was eager to talk about his music, but I was duty-bound to first ask about the current political atmosphere in Spain.

Serrat, 71, is a strong defender of his native tongue, Catalan, and has recorded many songs in that language. Under the Franco regime in the 1960s and 1970s, Serrat rebelled against prohibitions aiming to repress the use of Catalan in Spain. Eventually, his criticism of Franco forced him to live in exile in Mexico for a time.

I started our discussion with a question about the most recent popular sentiment for Catalonia’s secession from Spain: Should the region of Catalonia be independent? “I think that people should be free to decide their own futures,” Serrat said. “But that doesn’t mean I believe that it would be advantageous for Catalonia to be independent from Spain.”

I responded by asking if he thought that independence would perhaps be a disadvantage.

Serrat understood the weight of his words. “Of course, this point of view puts me at odds with 47% of my fellow citizens who have voted ‘yes’ (in the most recent referendum), and I respect that.”

I also asked him about American politics, particularly about Donald Trump, the Republican presidential candidate who has taken a hard stand against immigrants in the U.S. “I really find Trump terrible,” Serrat said. “The things he dares to say are frightening …. He’s uneducated, a man with no manners whatsoever. He’s much more worried about his hair than another human being’s life.”

Finally, we dove into the topic of his music. I told Serrat that my prep work for our discussion involved listening to his “Antologia Desordenada” album. Songs like “Señora,” “Cantares” and “Penelope” inevitably transport me to another place and time in my life.

And that’s exactly Serrat’s aim: “(A song) throws a punch … a jolt, a smell, and leads you back to where you grew up, the place where something happened, where you left something.”

While listening to Serrat’s music, I was nostalgically transported to my first trip to Madrid around 1979, when I heard him give a free concert at Las Ventas bullring. It was a magical night.

Of course, concerts these days aren’t what they used to be. Serrat recently stopped a show to confront a concertgoer who was filming everything on his phone: “How’s the taping going?” Serrat asked him. “Wouldn’t you rather watch the concert live?”

I mentioned that incident to Serrat. “It’s an opportunity lost,” he said. “Sadly, the cellphone is becoming an extension of our arms. That’s not right. When I go to a concert, I want to watch it live.”

We also talked about faith, and whether he has maintained God in his life through the years. “No one — faithful or not — loses God, because somehow we all are God.” However, Serrat said he is not betting on having eternal life. “If I found that surprise, I’d be very happy,” he said. “When I die, I should vanish completely after a while.”

I pointed out that in his song “Cantares,” he described paths in life being like “trails on the sea.” Serrat said that’s how he lives. “It’s wonderful not knowing how things will work out,” he said. “I’ve always had the feeling that there is no such thing as a mandatory path …. I can always leave one and take another.”

I suggest that “Cantares,” then, best describes his life as an artist and a Spaniard. He corrected me, though. “I’d go with ‘Canço de Bressol,’ ” Serrat said, “which is a song dedicated to my mother, based on a popular tune from Aragon and sung in Catalonian and Spanish. That is, maybe, the one I could somehow relate to.” (Listen to it here: bit.ly/1LPJQh0.)

At the end of our discussion, I remained star-struck, moved by the fact that I was chatting with someone whose songs have punctuated so much of my life. “Today is a good day,” I told Serrat, thankfully.

“Yes, it is,” he replied. Then he shook my hand and was on his way.
At least I’ll always have his music.