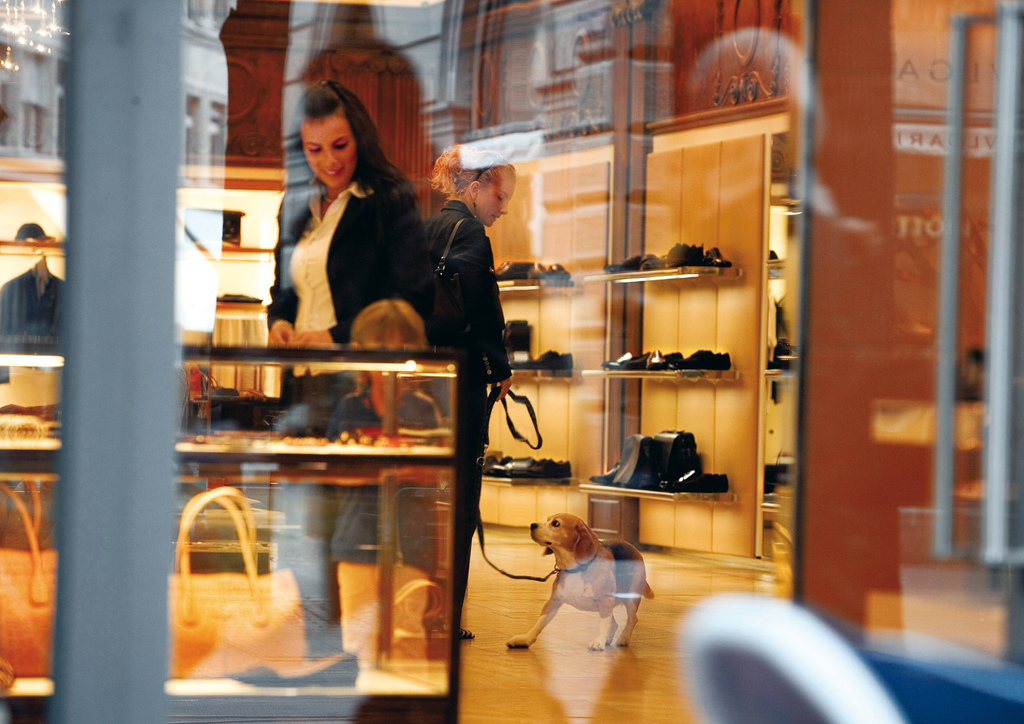 On a recent visit to Venice, when I was waiting in the customs line
at the airport, a couple in front of me was chatting in Russian, and there was a
Russian family of four behind me. The Italian official checking passports spoke
Russian to them.

Later while in Milan, I spotted six Russian women loaded with shopping bags
taking possession of a table at a trendy restaurant near Via Spiga. A man with
three children, all of them wearing bright green and orange jackets, asked an
Italian waiter for a table, in Russian. The waiter immediately led them to their
seats.

At my hotel in Venice, there were six Russian-language channels available on
the television, and only three in Spanish. A few days later in London, I read an
article about how wealthy Russian investors, uneasy about keeping all their
money in Moscow, are buying property in London, which has caused real-estate
prices to spike in what is already one of the world’s most expensive cities. In
Miami, where I live, one frequently hears Russian spoken in clubs, malls and
luxury restaurants.

Indeed, it seems these days that the Russians have invaded, with the intent
of spending money. It’s understandable. Very few people were allowed to leave
the Soviet Union before it collapsed in December 1991. After 15 independent
nations emerged from the breakup of the union, it took many years for their
economies to make the painful transition from the old Soviet system to a market
economy. (Though a few people did make fortunes from the privatization of
state-owned companies, which sparked the global Russian shopping spree.)

It was a tremendous shock for people to have to embrace capitalism after
decades of communism, and it certainly wasn’t easy for post-Soviet Russia to
cede its role as a superpower. As part of the Soviet Union, the Russian military
controlled thousands of nuclear missiles; the country was both feared and
respected. After 1991, the Russian people were jolted by the shift from a
one-party political system to a relatively democratic one. Fifteen years after
those two shocks, more than 66 percent of Russians resented the loss of the
Soviet Union.

But those memories have faded, the economy is stronger – and Russians want
more. More power. More reach.

Nobody embodies the new Russia more than President Vladimir Putin.
The one thing that he doesn’t want is a lesson in democracy from the United
States government, which, as he likes to remind people when he is criticized by
human-rights groups, invaded Iraq for no good reason more than a decade ago;
keeps dozens of enemy combatants in Guantanamo without filing charges against
them; and has secretly collected phone and email records from millions of people
around the world.

So while some super-rich Russians are enjoying their prosperity, Putin is
taking bows on the world stage, basking in the attention he has been receiving
and invoking some nostalgia for the Soviet era. The Winter Olympics in Sochi
were a big success this year, and Russian officials are already preparing to
host the World Cup in 2018.

But Putin has taken the nostalgia for a bygone era a few steps too far.
First, he made sure that any actions against the regime of Bashar Assad in Syria
were blocked in the United Nations Security Council last year, and then this
year his military invaded Ukraine and annexed Crimea. Both situations have led
to dismal diplomatic relations with the United States and its NATO allies in the
West.

Nations that wish to challenge Putin have few options. Russia’s 12,000
nuclear warheads rule out the possibility of military intervention, even when
the country threatens one of its neighbors and rolls tanks up to its borders.
The only real option available to President Barack Obama and the other leaders
of Western nations is to impose economic sanctions – moves that would isolate
Russia in the hopes that Putin will come to his senses. But, as Obama recently
explained at the recent G7 meeting in The Hague, Putin’s bravado comes “not out
of strength, but out of weakness.”

I agree. Putin knows that the Russian empire’s days are past. While he is
busy showing off his military prowess, the Russians who are truly conquering the
world are those with purchasing power, and they’re taking over one ruble at a
time.