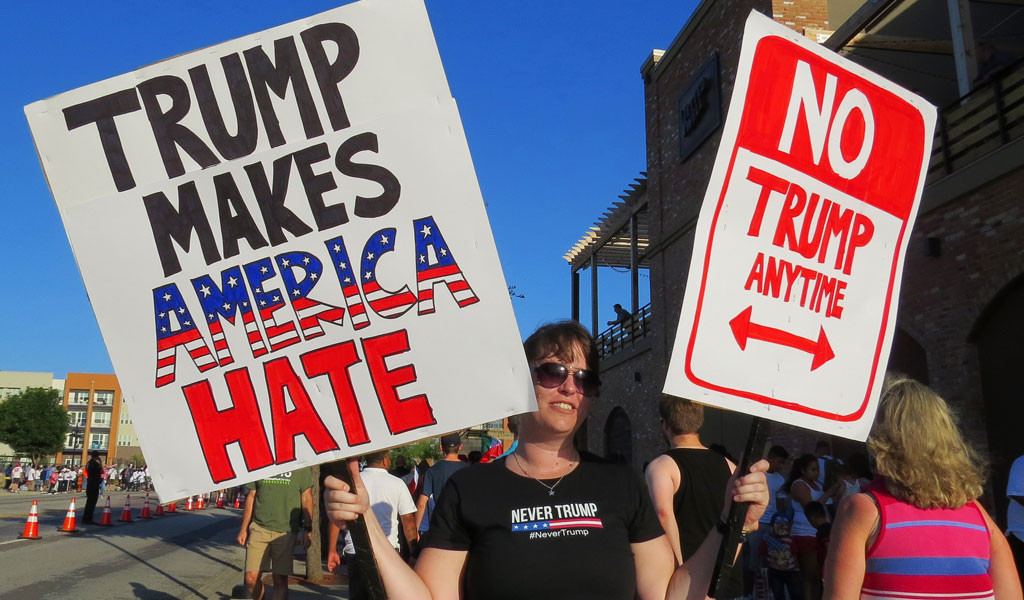 On a sad day last week, after the Supreme Court announced that President Obama’s executive orders on immigration would remain blocked, I saw some politicians cheering.

Hate has become the new normal in America. We naively thought that by now prejudice and bigoted rhetoric would be relegated to the margins of society — private thoughts or whispers. Suddenly, however, racist statements are shouted out on television, in social media and along the campaign trail.

We’re going through a long hot summer as a deeply divided country — and the autumn doesn’t look like it will offer much relief. In fact, all the hateful rhetoric that we’ve been hearing lately is likely to be amplified by the national political conventions — the Republicans’ now underway in Cleveland, then the Democrats’ in Philadelphia.

The primary driving force of this hate wave has a name and an all-too-present face: Donald Trump. For more than a year, he has put hatred and divisiveness up front in his presidential campaign. We know the facts: Trump has labeled Mexican immigrants as rapists and criminals and suggested banning Muslims from entering the country. He has mocked a reporter with a disability, belittled Sen. John McCain’s years as a prisoner of war and refused to apologize for making blatantly sexist comments about women.

Trump is a hater. I’ve never witnessed such venom in American politics as in his campaign. Undoubtedly many of his followers believe that if their candidate can attack people, they can too. The result is a poisonous political climate where insults, bullying and racism have become commonplace.

But Trump is hardly the sole source of all this divisiveness. He reflects undercurrents that have resurfaced with a vengeance this summer. This month alone, two African-Americans — Philando Castile in Minnesota and Alton B. Sterling in Louisiana — have been killed at the hands of white police officers. Their deaths highlight a sad, long-held suspicion in this country that the darker the color of your skin, the more likely you are to be a victim of police brutality.

What’s new is that modern technology allows us to witness injustice in real time. When Philando Castile was shot in a suburb of St. Paul, Minnesota, his girlfriend broadcast the aftermath on Facebook Live. Thousands of people watched live as Castile’s life slipped away after an incident that began when he was pulled over for having a broken taillight. In Baton Rouge, Louisiana, a witness recorded the moment that two white police officers knocked down Alton Sterling. Shortly after, one officer shot Sterling in the chest, and viewers were able to watch the whole thing.

Sadly, communication between authorities and the citizens that they are supposed to protect is suffering. According to a New York Times poll, 69% of Americans say that racial relations are at their worst since 1992, when riots were sparked after the police beating of Rodney King.

After the shooting deaths of the officers in Dallas, President Obama, the nation’s first African-American commander in chief, had no choice but to admit the obvious: “I think it is fair to say that we will see more tension in police — between police and communities this month, next month, next year, for quite some time,” he said at a news conference earlier this month.

In 2014, I sat down with director Spike Lee and asked him if Obama’s election had truly ushered in a post-racial era in the United States, and if the color of someone’s skin no longer mattered, as some commentators were claiming at the time. Lee’s answer: “That’s bull—-,” which is self-explanatory.

No, we’re not living in a post-racial era, and I’m afraid that our summer of hate will linger at least until Election Day in November. I don’t see any indication that divisive attacks will decrease — on the contrary, as the election approaches, they might intensify.