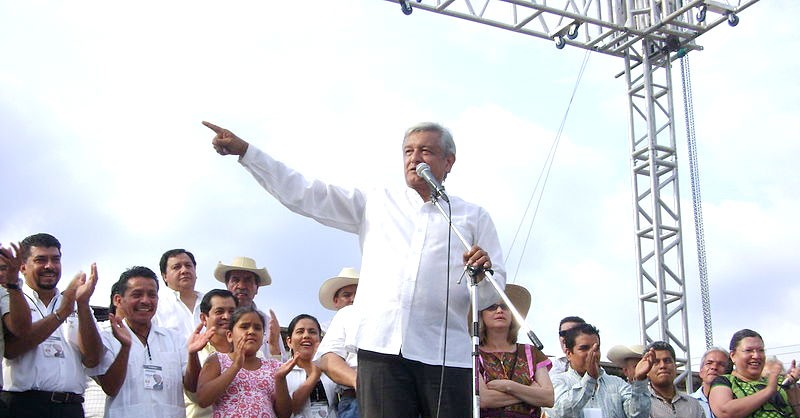 Andres Manuel Lopez Obrador, the two-time presidential candidate from the Party of the Democratic Revolution, will not recognize Enrique Pena Nieto as president of Mexico, just as he did not recognize Pena Nieto’s predecessor, Felipe Calderon.

“The presidency was robbed from us twice … this time by throwing money around,” Lopez Obrador told me in a recent interview.

Pena Nieto did not win the republic’s presidency _ the presidency was bought. That is how many citizens feel.”

In the summer of 2006, Lopez Obrador, the former mayor of Mexico City, lost the presidential election to Calderon by a narrow margin. He insisted that widespread voter fraud had marred the vote, though legal challenges filed by his party were unsuccessful at overturning the results. Still, during a rally in November shortly before Calderon’s inauguration, Lopez Obrador was declared the “legitimate president of Mexico” by supporters _ a sort of shadow office that he has held for the last six years.

Lopez Obrador ran for president again this year and lost to the Institutional Revolutionary Party’s Pena Nieto, though Lopez Obrador contends that the PRI bought votes _ millions of them _ in order to win. The final tally showed that Pena Nieto beat Lopez Obrador by about 3 million ballots. The election was not free and clean, he told me. “(Pena Nieto and the PRI) took advantage of people’s poverty.”

Again, Lopez Obrador challenged the results. But after investigating the allegations of vote-buying brought by Lopez Obrador, Mexico’s national electoral tribunal ruled that the presidential election had indeed been conducted in a “free and authentic” manner, and that accusations against the PRI were “unfounded.”

While campaigning earlier this year, Lopez Obrador expressed concerns that Pena Nieto and the PRI were skirting campaign spending limits and striking deals with certain news organizations in exchange for favorable coverage. I asked him about this: If he suspected that he did not face a level playing field, why continue to campaign?

“Because you always bet on defeating fraud,” he told me. “Because even though the cards are stacked against you and the die are cast, you believe that you can defeat it.”

During our talk I also noted that his refusal to concede the election to Pena Nieto might seem like a case of sour grapes to some people. I pointed to the fact that Al Gore, the U.S. Democratic presidential nominee in 2000, recognized George W. Bush’s victory despite his disagreement with the Supreme Court’s ruling that ultimately gave Bush the presidency. I also brought up the case of Henrique Capriles in Venezuela, who earlier this year conceded to President Hugo Chavez even though he was certain that Chavez had used government resources in order to get re-elected. After all, Capriles said, that’s what one does in a democracy when one is defeated.

While Lopez Obrador respects the opinions of people who consider him a sore loser, he stresses that Mexico’s experience with elections is vastly different from that of the U.S. and Venezuela. “In Mexico, there has always been electoral fraud,” he said. “We are the world champions of electoral fraud.” He continued: “I cannot accept the results because that would imply that I have become an accomplice of this electoral fraud.”

I asked Lopez Obrador what was next for him and his supporters. “Civil disobedience, peaceful but active,” he said. “We have a goal. We are fighting because we want to transform the country. … We are going to draw a line _ we cannot legitimize electoral fraud.”

He continued: “Those who rule this country … whenever there are elections, they deal in poverty _ giving away supplies, construction materials. They traffic in people’s hunger. That is what Pena Nieto did.”

Lopez Obrador has few kind words for Felipe Calderon, who will become a research fellow at Harvard now that he has left office. During Calderon’s administration at least 65,000 Mexicans died as a result of drug violence. “He left behind a lot of suffering,” Lopez Obrador told me. “He … will not be at ease with his conscience for what he did _ it was a bad administration.”

Does Lopez Obrador plan to throw his hat in the ring as a presidential candidate in 2018? “I don’t know what destiny holds,” he said. After six years as Mexico’s “legitimate president,” Lopez Obrador said he plans to just focus on his current role: “I am a social leader, that is what I am.”