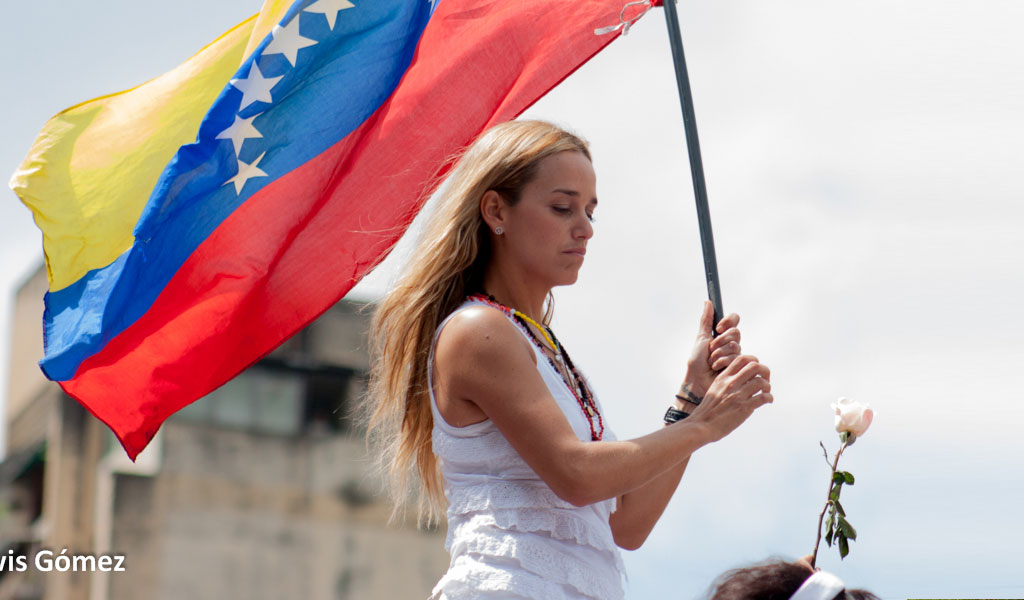 “There are ways out of this disaster inside the Constitution.” – Leopoldo López

Every morning at 5:30, Lilian Tintori gets up and reaches for her Bible to pray. At exactly at the same time, Leopoldo López, her husband, also opens his Bible in his cell in Venezuela’s Ramo Verde prison.

Tintori and López decided that they would connect through prayer at the same time every morning shortly before López, a leader of the political opposition in Venezuela, turned himself in to authorities in February 2014, after he was accused of inciting violent protests against the government of President Nicolas Maduro.

The authorities leveled absurd charges against him, including allegations of property damage, arson, criminal association and public instigation. The criminal case against López has been a travesty from the start, and human-rights organizations – including Amnesty International and Human Rights Watch – have characterized his detention as an attempt by Maduro to crack down on political opponents who speak out against his authority.

By keeping López locked up,Maduro has made two enormous mistakes. First, he has created a martyr; many people in Venezuela and abroad are comparing López to Nelson Mandela. Second, Maduro vastly underestimated Tintori. He never considered that López’s wife would be as strong a fighter as her husband, and this was a serious miscalculation.

Since early 2014, López has essentially been silenced in prison, so Tintori has been speaking out on his behalf, making sure to keep her husband’s quest for justice at the forefront of political discourse in Venezuela. For the most part, she wages her battles domestically, but she doesn’t hesitate to make the case for his release in international forums as well. This is how Tintori has become one of the biggest threats to the Maduro regime’s tight hold on power. And her bravery stands in stark contrast to the cowardice of presidents across Latin America, who have refused to criticize violations against human rights and democracy in Venezuela. (Their continued silence just days before the start of the Summit of the Americas in Panama is simply embarrassing.)

But Tintori will not be silent.

I interviewed her recently in Miami, and she detailed some of the abuses that her husband has endured in prison. Earlier this year, Antonio Ledezma, the mayor of Caracas, was arrested on charges of participating in a coup attempt against Maduro – charges that human rights organizations have also denounced as being politically motivated. Tintori says López’s prison cell was raided the day that Ledezma was taken into custody. “Armed men dressed in black entered and thrashed his space,” she told me. “They stole his memoirs; everything he had written was taken . that cell inspection took seven hours, then he was thrown into a punishment cell called the Little Tiger.” All that fits in the punishment cell, Tintori said, is a mattress and chair.

Prison authorities also frequently try to intimidate her husband. “One night, at 1 in the morning,” she said, “they threw human feces and urine through his window; they cut power to his cell, they cut off the water so he can’t bathe – it’s absolutely inhuman treatment. It’s torture.”

Venezuela is deeply troubled. The country has one of the highest inflation rates in the world, and the crime rate is horrific. A steep fall in oil prices and a constant shortage of goods have made for endless lines and contributed to a deep sense of frustration across Venezuela. Maduro often points the finger at agents of American imperialism for the country’s problems, or his opponents or business leaders – anyone but himself.

During our discussion, I asked Tintori how Venezuelans can extract themselves from their situation through legal means, since Maduro definitely won’t step down.

“If he loved the Venezuela, if he loved the people, he would resign,” she said. “The system failed. This is an undemocratic system that failed.”

Tintori said one of the few legal options available to Venezuelans is to demand a recall referendum in 2016 to remove Maduro. The problem with a recall election, of course, is that the agency that counts the ballots in Venezuela is also controlled by Maduro. That’s a big obstacle to overcome.

But López and his wife will remain outspoken critics of Maduro, and they will remain in Venezuela, even though Maduro has tried to get them to leave. Before López turned himself in, the Maduro regime offered him a chance to live in exile. “Please, leave Venezuela; the plane is ready,” they said, according to Tintori. “That was the message that Maduro sent directly to our home. We said,’No.'”

Tintori is not alone in her advocacy. Other political prisoners’ wives – including Mitzy Capriles de Ledezma, Antonio Ledezma’s wife – are starting to speak out publicly and demand justice for their husbands. Perhaps these women will be able to rally Venezuelans and find real solutions for the country’s woes. They’re certainly not giving up, especially Tintori.

“I married Leopoldo, and I also married his commitment for a better Venezuela. And I won’t stop,” she said. “I won’t stop.”

(Here is my interview with Lilian Tintori in Spanish)