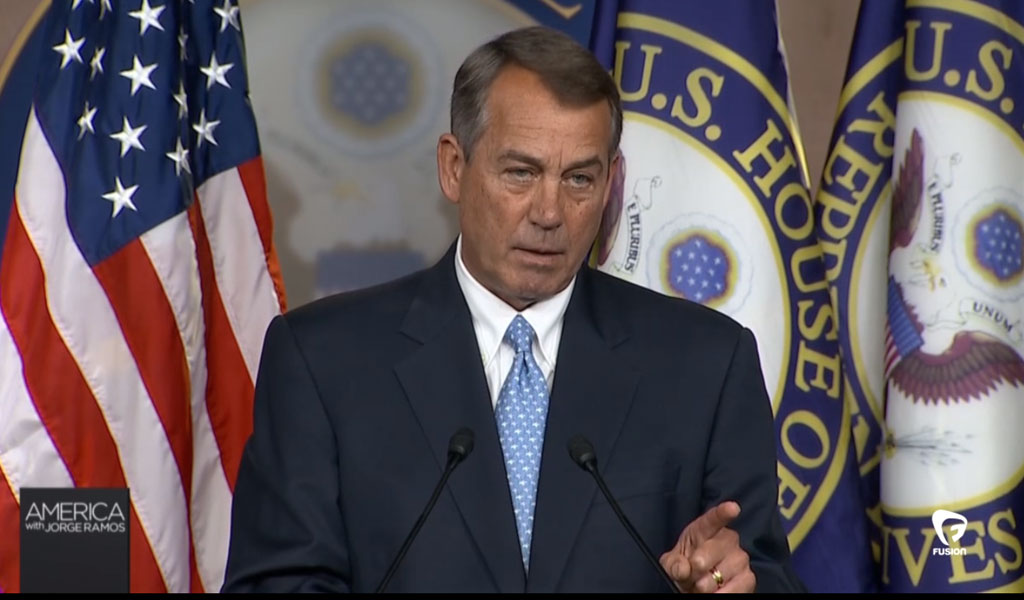 WASHINGTON – For months I tried to get an interview with House Speaker John Boehner, the Republican from Ohio, and he refused every request.

So last week I boarded a plane, flew to Washington, and went to a press conference he was giving instead. The result was anything but pretty. But as a
journalist and an immigrant, I had to ask him some questions.

“Why are you blocking the immigration reform?” I asked Boehner.
“Me?” he replied, chuckling.

“Yes, you,” I answered. “You could bring it to a vote, and you haven’t.”
Boehner clearly didn’t like my question – he looked at me angrily.

Too bad. I wanted to know how he could justify preventing the passage of
legislation needed to create a path to citizenship for the United States’ 11
million undocumented immigrants. The Senate passed a reform bill almost a year
ago, but Boehner and the Republicans in the House have done everything possible
to delay a vote. It was time to bring this matter into public view.

“There’s nobody more interested in fixing this problem than I am,” he said.
But those were empty words. Millions of Latinos don’t believe him.

Boehner tried to deflect blame for the delays onto President Barack Obama,
saying he doesn’t trust Obama because the administration made so many changes to
his signature health care legislation .Obama has to win Republicans’ confidence,
Boehner said. That’s just another excuse, and completely beside the point, since
the Affordable Care Act has nothing to do with immigration reform.

If you weigh all the facts, there is only one possible conclusion: The man
who is blocking immigration reform is John Boehner, and he has no good reason
for doing so. Boehner is not doing his job. Period.

Later I went to a press conference with Senate majority leader Harry Reid and
Sen. Charles Schumer, the Democrat from New York, and told them what Boehner had
said. It was clear that in spite of everything, the Democratic Party’s and the
White House’s strategy is still to allow more time for Boehner and the
Republicans to find a solution. I think that’s a false hope. The real question
is, how long should we wait?

Schumer has told me that the deadline for the Republicans to move on the
immigration reform bill could be as distant as July 31, but waiting is a bad
strategy – after that, there will be no time for anything. Members of the
Congress take all of August off. In September, they are only scheduled to meet
for 10 days. They will meet for two days in October, seven in November and just
eight in December. It would be impossible to debate such a complicated matter in
such a short period of time.

So why don’t the Republicans want to reform our immigration laws, which are
so clearly failing almost everyone? It’s possible that preventing the
legislation’s passage may suit Republicans’ short-term goals – some political
calculation that is part of their plan for winning the congressional midterm
elections in November, most likely by attacking Obama.

And in the long term, it’s a losing strategy: If Republicans don’t help to
create a path to citizenship for undocumented immigrants, they will suffer the
consequences for decades.

According to recent estimates, in 2060 there will be 129 million Latinos in
the United States, constituting 31 percent of the population. Soon ,any
politician who wants to win an election will need the Hispanic vote. If
Republicans keep doing what they’re doing, they’re going to lose the White House
for generations to come.

But I’m afraid they don’t understand this, or perhaps in their stubbornness
and ignorance, they refuse to recognize that the country is changing. They don’t
seem to be aware that they’re alienating voters as they pursue shortsighted
policies and strategies that cater to their traditional base – mostly older
white males – while showing no compassion for undocumented immigrants.

I don’t see any glimmer of hope right now, nor for the rest of the summer.
This fall the focus of the immigration reform fight is going to change. Instead
of pushing Republicans to approve the reform legislation, activists will mostly
turn to trying to persuade President Obama to suspend most deportations of
immigrants, since his administration has deported over 2 million immigrants,
separating thousands of Latino families in six years.

Should activists who are already protesting Obama’s policies pause their
efforts until the end of July? Should they hand Democrats a truce – at least to
give his administration’s plan of waiting the Republicans out a chance to work?
It would be hard to ask that of a parent who is at risk of being deported.

Three things have become clear to me: First, if immigration reform does not
pass this summer, Boehner and the Republicans will be to blame. Second, Latinos
won’t forget this failure. And third, Boehner will never grant me an interview.
But I know where to find him.

(You can watch the video of my discussion with Boehner for Fusion network
here: http://fus.in/RXTdaf)